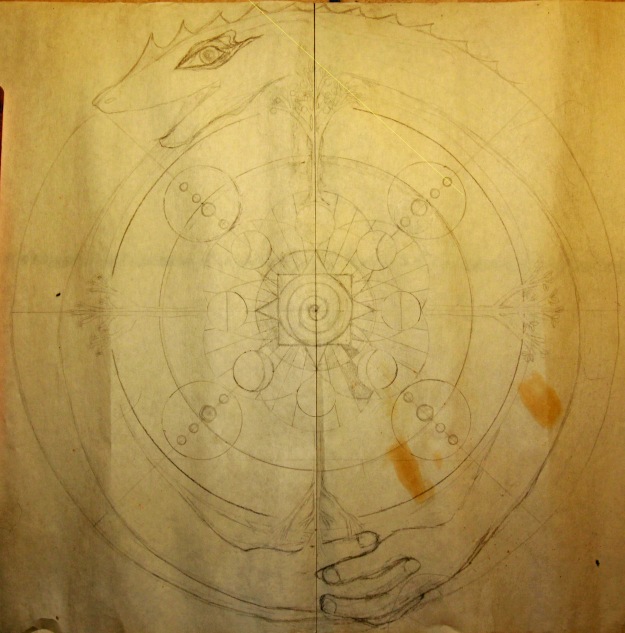 Ever have one of those incarnations when you feel like you’re just eating your own tail?

Whilst searching for some other document (never found; can’t even remember what it was now), came across this blast from the past: one my first mandalas. Not sure about the date, but probably from sometime in the mid-’90s, although it could be earlier. Sketching it out was meticulous work; I literally used a compass and a protractor to get all the curves and angles. The center part shows the phases of the moon, and the cardinal points are trees during the 4 seasons.

After putting so much effort into making the sketch perfect, I then became terrified to ruin it by trying to color it, so it just hung out in a tube for 15 or 20 years. No idea how it got stained…the stains are not as bad as they look, but rather amplified due to the Photoshop correction I had to do to the original image just to make the pencil lines clearly visible.

The whole this is pretty banged up, and, of course, held together with scotch tape, but none of that matters anymore, because now I do have Photoshop. I could draw a clean and more perfect copy in a relatively short period of time, and I could color it in a million different ways without ruining the original. Would make a wicked cool T-shirt.

Not that I don’t have 50 other projects.