Last year I was out in the desert with the Fox and he suggested we take a bushwhacking off-trail detour to look at a hilarious piece of graffiti someone left. “Welcome to Chupacabra Country,” it said on the back of same random abandoned building. This is indeed the land of the fearsome goatsucker. And the inscription stuck with me so long that I went out and got some polymer clay and made this plaque for the Fox to enjoy.

This is my first time using polymer clay in this way. I made a lot of mistakes. I learned a lot.

The color is Unicorn Spit, which I had also never used before. Lots to learn.

I made the letters by pressing an old set of refrigerator magnets into the clay. The little dots in each letter were actually formed by the magnet.

Probably will make another plaque like this for myself, but I think I’ll flip the coloring so the background is read and the lettering is yellow. 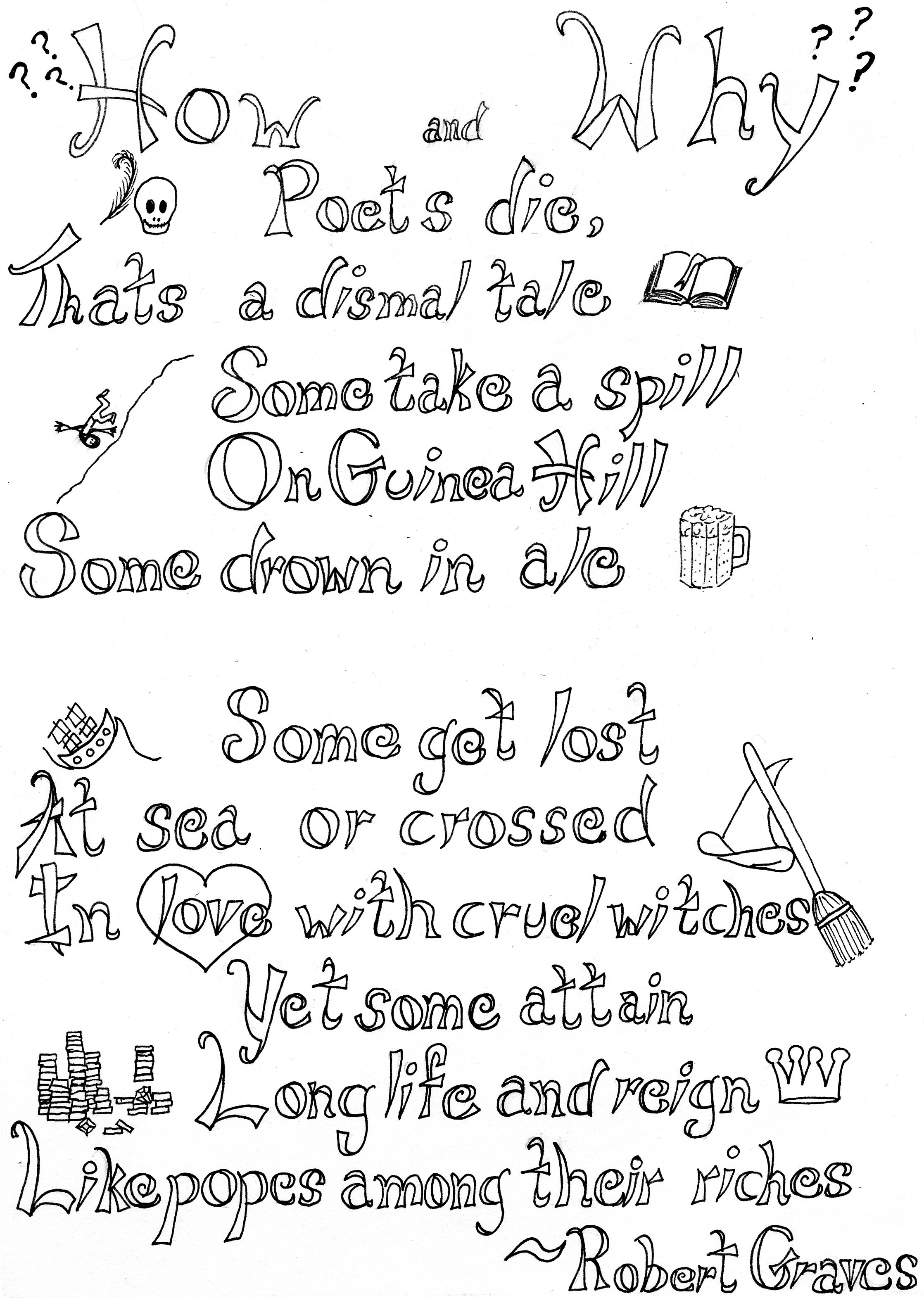 How and Why by Robert Graves

This is sort of a repeat, in the sense that I’ve posted the image before, but sort of not, due to the way I started blogging, which was to create 6 months’ worth of posts in a week. It always seems so sad when someone’s just started something like a blog and you go there and barely find any content. So I decided to backdate the entries to make it look like I had been blogging for 6 months before I started publicizing new posts in any way. Consequently, there’s some wonderful content that’s been viewed by about 6 people.

I love this piece; it’s always been my intention to clean it up in Photoshop and, if I can get permission from the estate of Robert Graves, to sell prints. The original hangs beside my desk and has for years, and yet only now I’m noticing a missing apostrophe. There’s a few higgledy-piggledy lines. Ink used to make me more nervous than it does now. It’s weird that the text isn’t straight even though this was all penciled out before inking, and I used a ruler and everything.

My hand is getting better; next week comics will return. Originally I wanted to post a picture of some kids wearing QvD merch today, but apparently it’s not a good time to get permission from the family so I’m waiting to see if I can’t get a photograph of some different kids in my clothes. Otherwise I’ll share another of my favorite Trickster’s Hat projects.

When I was in middle school, I basically came home every day and wrote for about 2 hours. In grad school, I used to write every night between 10 pm and 2 am. I didn’t really think about it; during the times in my life when I was into my work, I was into my work. When I do NaNoWriMo or go on a writing retreat, I write at least 2000 words a day, and often, many, many more. Some of us are lucky in that we don’t have to discipline ourselves too much: the thing we want most is the thing we want now. 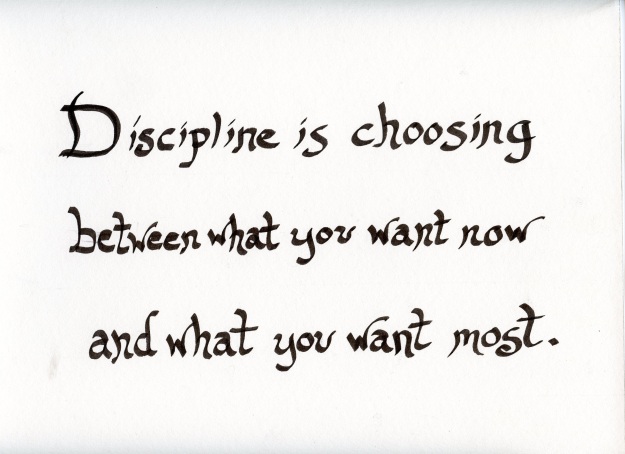 It’s a sign. It pretty much speaks for itself.

I just lettered this sign for my darling husband, at his request. Usually, something like this would take me a couple days, and each letter would be perfectly spaced and formed, sketched first in pencil and then inked with a fine-tipped pen (but I would still manage to smear the ink while erasing the guidelines, and also get some on my hand and smudge it in the gutter). When I lettered the Robert Graves poem, it took me about a week, and I’m pretty pleased with it, but it still isn’t perfect to my eye. Anyway, he said he didn’t care if it was perfect, he just wanted it done. So I just quickly blocked out approximately where the letters should go.

It’s an interesting sentiment, anyway. There are times when I don’t want to draw or write, and I have to force it. There are even times when I don’t force it and just watch Netflix and maybe cry about my failure as an artist. Usually, though, I’m fairly focused on my goals. When I decide to write 50,000 words in a month, or cut out carbs, or clean my office, usually I can just do it.