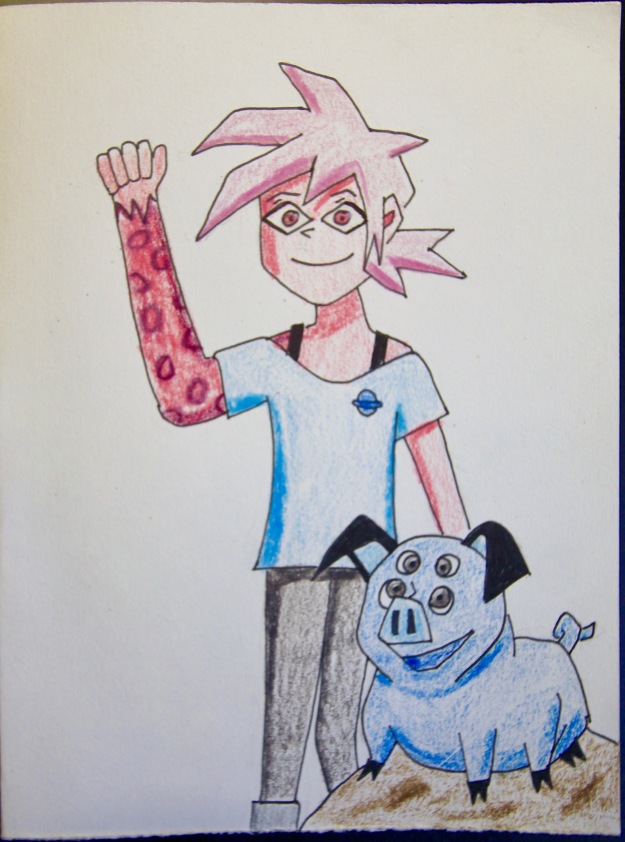 What a conveniently placed rock!

This card is from my stepdaughter’s birthday a couple weeks ago, before the end of the civilization as we know it. It’s fanart from a newish Netflix cartoon called Kipo and the Age of Wonderbeasts, about a post-apocalyptic Earth where most of humanity lives in underground burrows because the surface is rules by mutant animals. If you are trapped in your own home and enjoy that sort of thing, I highly recommend it. 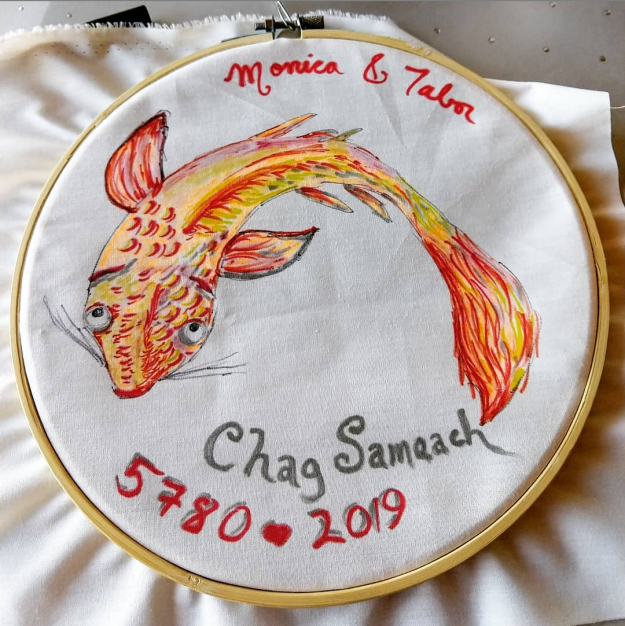 Today I learned that embroidery hoop art is a thing. A good thing.

This week is the Jewish holiday of Sukkot, aka the Festival of Booths, which involves building a small booth in your back yard and then having your friends over to eat snacks in your small booth. As with most Jewish practices, there are numerous rules about the booth. Also, this holiday involves shaking a bunch of leaves with a citron. It’s a whole thing. Today, my parents took us to a holiday party their friends were having down in Vail.

Typically, your booth—the sukkah—is decorated with various items of produce hung from the ceiling (Sukkot is a harvest festival), but my parent’s friends instead opted to decorate theirs with laminated photos of sukkah parties past and embroidery hoop art made by all the people who visit their sukkah.

Koi are not a traditional thematic element of the holiday, but my parents’ friends also have a nice 16,000 koi pond, home to some granddaddy fish, so they were pleased.

“Chag Sameach” is the all-purpose holiday greeting in Hebrew; you can use it for any happy holiday. 5780 is the current year in the Jewish calendar.

The design was executed with a combination of Sharpies and fabric markers.

I’m clearly a bit behind on blogging; I have 2 more paper designs to share this week. 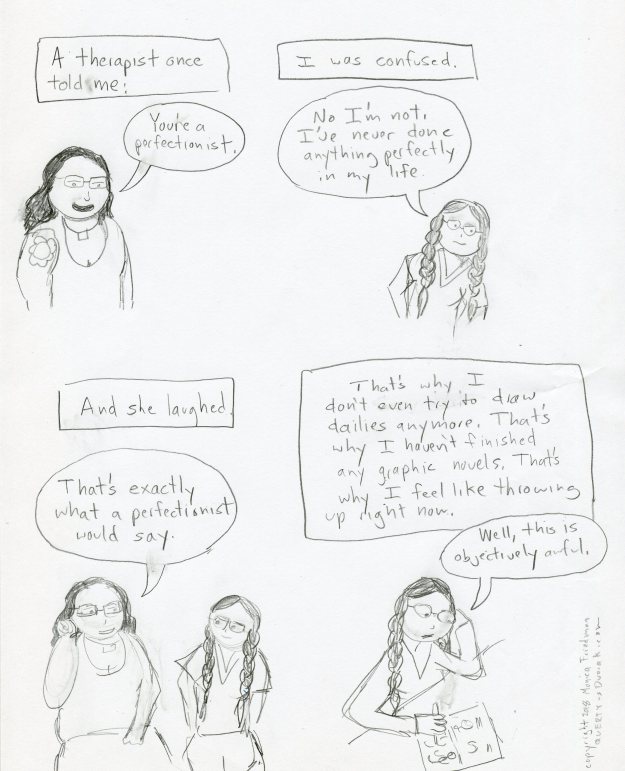 It’s about 4 years since I started drawing webcomics, and if you scroll through 4 years of posts, you can really see the progression of my ability to force the Wacom tablet and Photoshop Elements to do my bidding, but it feels like there’s kind of a limit to all that, because all week I’ve been staring at the blank panels for a comic book that’s been causing contractions in my brain for the last year without finding the confidence to start over again with a totally different style.  At this point, it pretty much looks like the crutch of a digital drawing tablet has caused my drawing skills to actually degenerate.

On the other hand, I think the therapist in this comic looks like the same character in both panels, which was the thing that really stymied my comic creation prior to the tablet.

Anyway, I’ve had a lot of ideas along these lines. The blog isn’t going to look as great as it could, but like my friend the Coyote always says, “Don’t let the perfect be the enemy of the good.” I need to unplug more regardless. I need to hold a pencil in my hand. I need to let go of the anguish I feel when I want to delete something or move something or just copy something. I’ve got to practice the basics if I want to feel worthy of comments like the one I received today from a woman who told me her dad drew for Mad Magazine and that I was the “real deal” just like him.

I’m not saying this is good, but it exists, which is more than I can say for last week’s comics.

Oh, hey! I drew a therapy comic that wasn’t about couples’ counseling. You’d think I’d had way more therapy than I’ve actually had based on the number of therapy comics I’ve drawn. I wasn’t even the person receiving therapy in the above comic.

I don’t know if that deer is laughing at me or with me.

You know you’ve spent too much time on the Wacom tablet when you try to control-Z a piece of paper.

This is just a quick sketch I did before I went to Florida (I’m back now) based on a selfie I took the week before. Although I still have some Dragon Comics to finish, I’m also working more in pencil lately, trying to be less dependent on the tablet and Photoshop. Been working on a big project that might take the rest of the year, but still trying to update this blog semi-regularly. Seriously, I drew this picture just to remind myself that I could draw.

The original photo was taken at a place called Rooster Cogburn’s Ostrich Ranch, about 45 minutes north of Tucson. It’s a tourist attraction petting zoo where you can feed little deer, miniature donkeys, goats, sheep, bunnies, parakeets, lorikeets, ducks, and sting rays. I might be missing some creatures. Oh, yeah, the stupid ostriches, which I ignore, because the rest of the attraction is much more fun. You get a lot of joy for $10. The deer are my favorite, but the sting rays are pretty cool. And the bunnies are bunnies. 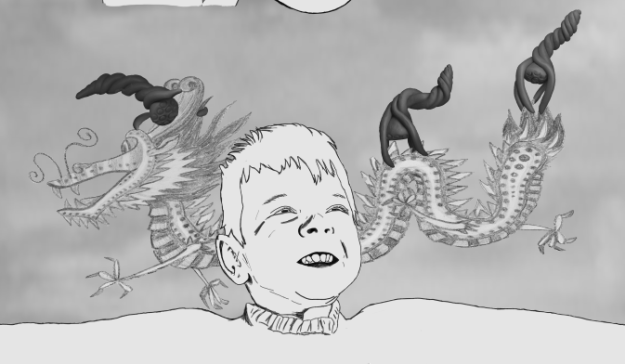 As usual, my process involved poor time management, overly complicating simple steps, and worrying a lot while checking out of the rest of life, but after 2 months of planning and 6 of work, here is one complete panel I like from “Close Encounters of the ∞ Kind.” This is why this blog looks like it’s been abandoned. I did draw 1 QvD comic in the last couple months but Miss Kitty thought it was a little morbid and anyway this is what I’ve been doing 25-30 hours a weeks for the last 3 months, a little piece of it. Hopefully, it all comes out looking as much like my imagination as this panel. There’s still at least a month of work before I’m happy with the entire comic, which will be 8 pages long.

So, this blog is not abandoned. It’s just on hiatus until I draw something I can share.

I swear, I’m a goooood boy. I would never go past second base before the election.

If I wanted to stay totally topical, this should have been a comic about Mike Pence’s hacked AOL account, but at this point, it’s just the same thing over and over. Hypocrites and liars being hypocrites and liars. And the fact that Mike Pence uses AOL is like…post-humor. It’s gone past comedy into some other realm where political theater and the theater of the bizarre have merged into one horrific blacklit broken mirror Wonderland where events defy categorization or comprehension.

Anyway, at least he recused himself from an investigation into the Russian election hacks he already knows didn’t happen because facts are malleable and you can discard the ones that don’t fit your world view.

My truth is that last night, after I posted the Sessions/Ozymandias comic, I realized that I had made the better joke in the blog post. So I started to draw that comic, because it was only 1 a.m. and knocking out another comic felt totally doable. But them I remembered my promise to myself when I started this project to let go of the drive for perfection, and also things that trigger insomnia, and I just let it ride and played the ukulele in the dark for an hour instead.

And then tonight, I thought I’d try a little caricature, which I haven’t done lately, because, let’s face it: Jeff Sessions looks like a kewpie doll with muppet ears. From a design perspective he’s sort of adorable. The gag was already written and all I had to do was not cross the line between big-eyed coquette Sessions and Peter Jackson’s Gollum. You would not believe how fine that line is. And here we are. I drew a comic.

Have a great weekend. Enjoy your freedoms.

As good a place as any to pause and reflect.

About 6 or 7 years ago, long before QWERTYvsDvorak, I started this 100 mandala project and when I got to 100, I wasn’t ready to stop. Why not 1000 mandalas, I wondered? Because, as it turns out, 1000 is a LOT of mandalas. Ultimately, I drew about 130 of them, not counting a few drawn after the blog started, and this is the very last last one of the original set. It felt like I had come full circle from the first (also rainbow) mandala and perhaps going on would mean just repeating myself.

I’m not saying I’ll never draw another mandala again, but they won’t be my regular Monday feature/safety net when I forget the weekend is ending.

Ms. Kitty suggested that I replace it with some sort of Monday gratitude, which seems like a really good idea right about now. Must think of how best to execute within the framework of QvD re: art.

But speaking of gratitude and art: that Lady Gaga concert sure was something, wasn’t it? So many people were watching it that the roads were completely empty, as were all the best hiking trails. But I caught it later on the NFL Twitter page. Those NFL people really put on a good show. I seem to recall they hosted one last year for Beyoncé that just slayed.

The pressure to accomplish something every day simply because someone else expects you to is a tremendous motivator. For years, the Fox and I emailed each other every day for “accountability.” We would share our word count, or number of pages edited, or queries submitted, like that. Definitely, there came days when I would have just skipped writing, except that it shamed me because he would know that I failed. So I wrote a lot more to keep from disappointing my friend.

Practically every night I think my ideas are good when I come up with them, OK as I create them, and terrible when I upload. Usually trolls don’t excoriate me. Maybe once or twice a year, although 137 upvotes/messages might be an exaggeration. Still, it’s enough to keep me going. Yesterday I was thinking about quitting. Today 7 people told me they hoped I didn’t. So, you know….

If you are among those who get something out of this work and don’t want me to quit, please consider making a small monthly donation to my Patreon. For the price of a cup of coffee a month, you could make a difference in the life of an artist. And to my 2 current Patreon patrons, thank you! You are appreciated. 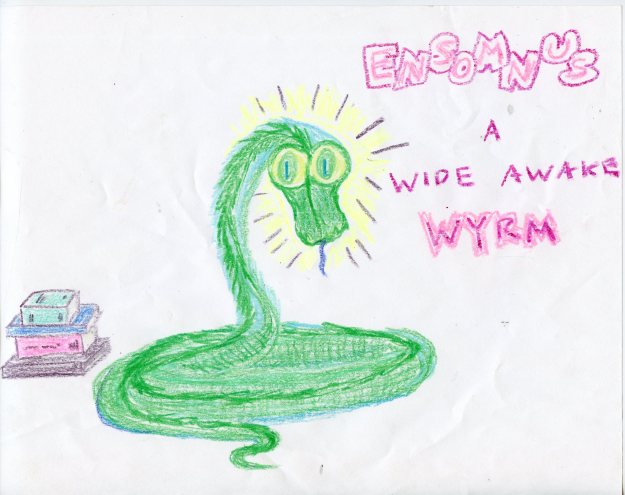 Someone read me a bedtime story? Please?

Per usual, the very idea that I have to be up early in the morning turns me into wide awake wyrm, no matter how tired I might actually be. In fact I’m to exhausted to even bust out the tablet and draw a Dragon Comics that’s already written. All I could draw was this armless, legless, wingless wyrm while doing 12 other things and thinking about 27 ways I could forget something important in the morning. Today was really another artistic bust. It took 3 hours to fold the laundry; that takes a good chunk out of a dragon’s day. And soul.

The next 3 weeks are going to be even more unpredictable and out-of-reality than last weekend was. Blog posts may be spotty.