My future brother-in-law is the only man my sister has ever brought to a family gathering. It was my wedding, and I’m glad they got engaged, because he’s in the family photos, and it would have been awkward otherwise.

I took the source photo a few days after the wedding. In fact, this is another section of the image used for the “My Nephew Goes Wading” drawing. A rather rich image!

A few weeks ago we went back to that place and The Man took some magical photos of the girl sliding down the dam. Might be another cool design.

I printed 50 of these and sent them to sissy for an engagement present. I’m uncertain as to whether she’s received them or not, but I’m pretty sure she doesn’t read QWERTYvsDvorak or check Facebook on a regular basis, so it can probably remain a surprise. I hope she likes them!

I think I’m coming to the end of my infatuation with this style. Although it was obviously insane, I started a huge painting based on a really complex image; after a week, it’s maybe 15% finished, and my thumb is all messed up and who knows if I’ll ever be able to wield a stylus again.

For now I’m wearing the brace and typing slowly, with 9 fingers.

This is among the first drawings I did on the Wacom Tablet: rough, but effective. There’s me—I can draw a fairly decent cartoon representation of myself, or a representation of what I picture as my best self—and there’s my stepdaughter getting her hair combed before bed, smiling because I’m showing her a funny cat video on YouTube. Working from a photograph would probably render better results, but this is drawn from memory, ninety minutes after she went to sleep. It’s flat; the proportions are off. I must live with my faulty perception, and my unpolished ability.

As may be apparent to readers, I’ve never had an art lesson in my life, save for grade school and camp curricula, and a couple semesters of pottery. What I have studied, extensively, to abstraction, to the exclusion of vast swaths of normal human existence, is writing. I have toiled well over my ten thousand hours to mastery. I have taken ten Iowa-style fiction workshops. I have taken craft classes. I have studied with acclaimed writers, and considered their feedback, received their approval. I have organized my own workshops, created circles of writers who read and critique each other’s writing. I have revised and revised and revised.

I could describe for you, in broad brushstrokes or pointillist detail, the way the light plays on my stepdaughter’s hair, how the blond strands glow with natural rivers of platinum and strawberry, the way the tangles of her youthful athleticism smooth out into silky sheets of gold under the thick teeth of my wooden comb. I could show you the surface: the cinnamon freckles blooming across pink cheeks, the cool ice of her sparkling blue eyes. I could show you the hidden details: the wine-colored birthmark just under her hairline at the nape of her neck, the cracked white leather places between her fingers where her skin at times dries out so completely that blood seeps from the gaps. I could write a book about her: the way she chatters about cartoons no one else has seen, the way she hold her nose not only when she jumps into the pool, but also when she swims, one-handed, beneath the water.

The image is what it is.

All my life, my writing has been characterized as remarkably good. Qualified writers who have achieved recognition in their art have told me that I write well. I have sold a couple short stories. In the corporate world I have supported myself solely through this craft since I finished my MFA, ten years ago, but publishing four short stories in a decade while writing web content at $100 an hour is not quite the same as selling a novel.

I cannot sell a goddamn novel. Another successful writer, a close friend, suggests I don’t submit enough, and so I polish my queries and hurl them out in the universe. Some agents, some publishing houses, can’t afford the courtesy of a rejection note. Most are kind enough to offer the form rejection. Occasionally, an agent will ask for some piece of a manuscript before rejecting me. Whenever I get a little traction, the dream gets pulled out from under my feet. My work is not viable, or commercial, or accessible, or whatever it is they seek.

Originally I considered calling this blog “Words Fail,” which I’ve kept as a tagline. Words fail, but not because of my ability. With modesty and humility, I can state that I probably write in the objective ninety-ninth percentile of people on the planet. But that is not, apparently, good enough.

And here I’ve decided to share my infant scribbles, little amusements in which I’ve invested one fraction of one percent of the effort that I’ve put into ten novels, two full-length stage plays, and countless short stories, and already, before I’ve even officially launched my brand or shared this URL with friends and family, people seem interested in what I’m trying to do.

My drawings only hint at their intentions; I can only polish them up to the point where my ability falters, while I’ve acquired the ability to burnish my writing to a fine, mirror-like glow. But words fail.

It’s unclear to me why this picture exists, since I didn’t enjoy the film Eraserhead in any way. My boyfriend at the time was a huge David Lynch fan. It’s 1991, most likely.

What I like about this next image is the style, where I worked primarily in chunks of gray, rather than lines. The subject was a guy in the year ahead of us at school, on whom my best friend had a bit of a crush. I only ever talked to him 3 or 4 times, but as the image shows, he was pretty cool for a high school senior. 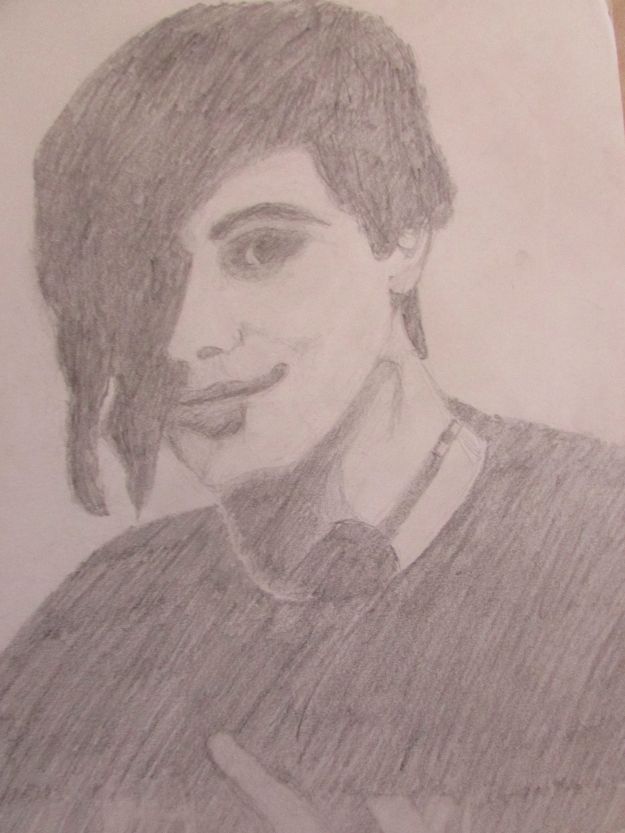 In college, I did a lot of surreal art, often collaborative, with my then-boyfriend. Our style tended toward psychedelic and depended much more on color than anything I had done up to that point. However, I still sketched from time to time. This image is of that boyfriend, so it’s probably about 1993. At one point, I had an even lovelier nude I had done of him in charcoal, but sometime in the last 5 years, I mailed it to his wife, who seemed a more appropriate owner.

I sketched a fair amount in high school and college, and was able to turn out passable portraits that looked like the subject, but they took me a long time and eventually my art was limited to periodic doodles in the margins of things. Writing was my true calling, and doing that at least two hours a day as a teen and four a day as an adult cut into other forms of self-expression. 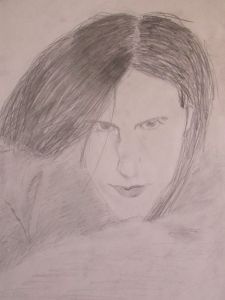 These sketches were all done when I was a junior or senior in high school, and while I find a number of completed images that I’m pretty happy with, there are also many unfinished portraits, illustrations I gave up on because I just couldn’t get them right. 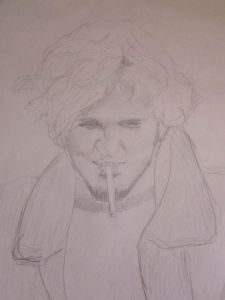 Who is this? Fairly certain it’s another rock star, and that the sketch is good enough that the subject could be identified, but I’m not sure who it’s supposed to be.