Just a little scribble that could probably be a comic if I didn’t think that whatever was going on here is probably not funny. Can’t help but think that this drawing means something, but it’s hard to articulate what that might be. I certainly was not trying to draw anything like this. 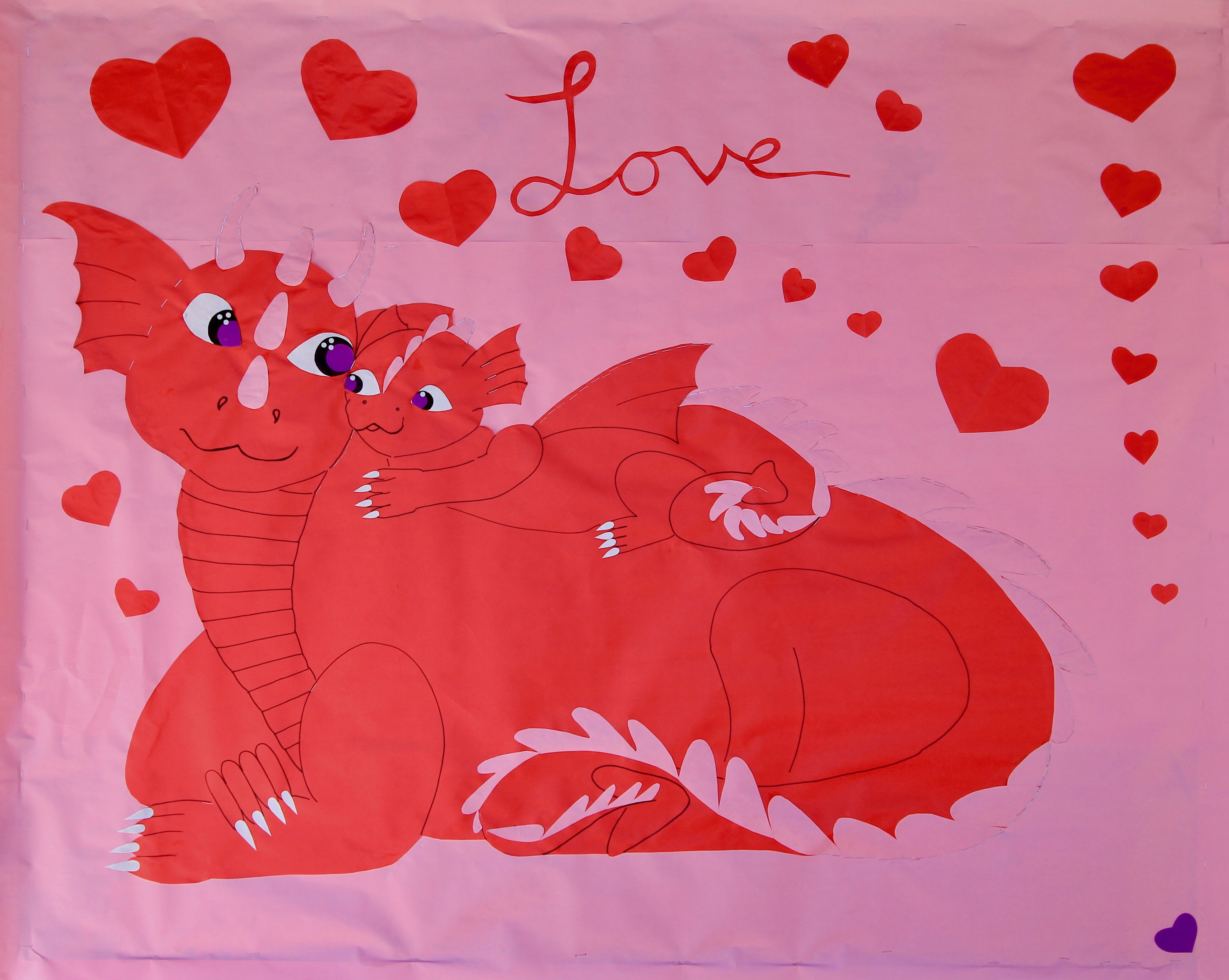 It’s the purest form of love there is: the love between a baby dragon and its parent.

Happy Valentine’s Day, whether you hate people or not.

I am trying to love people.

This was a pretty simple piece. I used Sharpie for the black parts (excluding the eyes), which saves a lot of time. I sort of wanted to make the chest part rainbow, but I also sort of wanted to go home, and home won. From a technical perspective it’s not one of my most amazing boards, but from an aesthetic point of view (particularly the aesthetic point of view of an elementary school student) it’s a raging success.

As I adding the stapled details some third graders came to admire my work and asked me what the dragons’ names were. I told them to feel free to name the dragons themselves.

One girl said, “The baby’s name is Shadow.”

So her friend decided, “The big dragon is Midnight.” 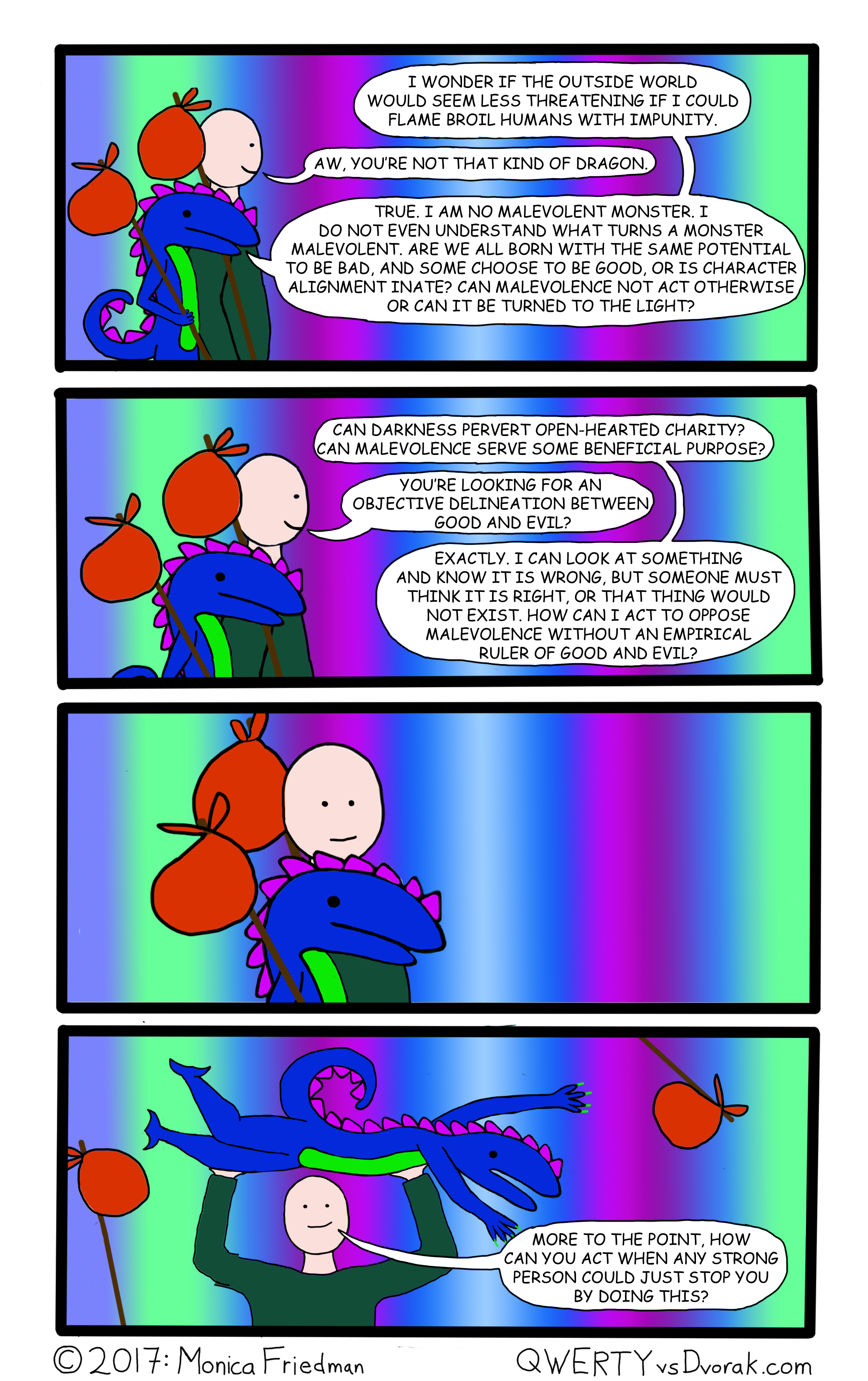 Get you a man who knows how to lighten the mood.

Obviously, Dragon could flame broil The Man if Dragon wanted to, but Dragon’s patience and forbearance is legendary among legendary creatures. You have no idea, the things Dragon has to put up with a world that mostly does not embrace dragons. Dragon would fight The Man, but The Man is not big enough, so Dragon has learned tolerance.

I like that last panel with The Man hoisting Dragon over his head. In real life, he can’t quite do that. I’m sure he’d like to. More to the point, when I started drawing comics, it would have taken me 3 days to draw. I improve. Slowly. 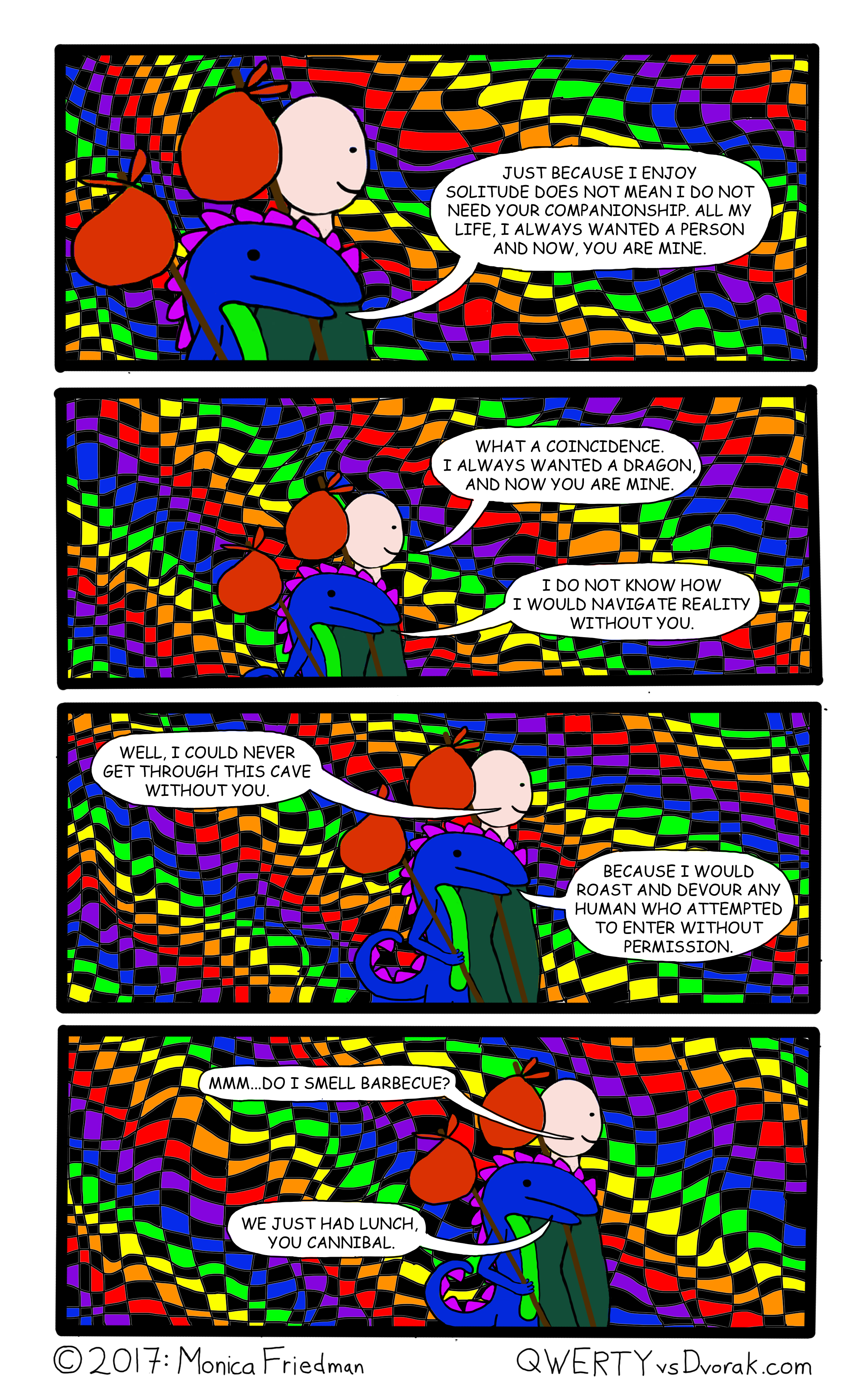 In The Man’s defense, while he did just have lunch a couple pages back in comic time, it’s been almost 4 months in real time. And he does love barbecue.

If a dragon eats a human, obviously, it’s not cannibalism.

Even though I got stung by a bee, again, and suffered what would be categorized as a “moderate” reaction (my entire forearm swelled up and it itches from my wrist almost to my shoulder) I made a comic. Hooray for me. It was weird typing these words I originally wrote months ago, especially today, as The Man is Away on Family Business and he might be back tomorrow or he might be gone for a couple days. I guess I go away without him a lot more often than he goes away without me, so that feels strange, too.

Otherwise all there is to say is that this background took way longer than I thought it would and I should have made the black stripes be rainbow stripes running perpendicular to the other rainbow stripes. It would have been at least 20% cooler. Live and learn. 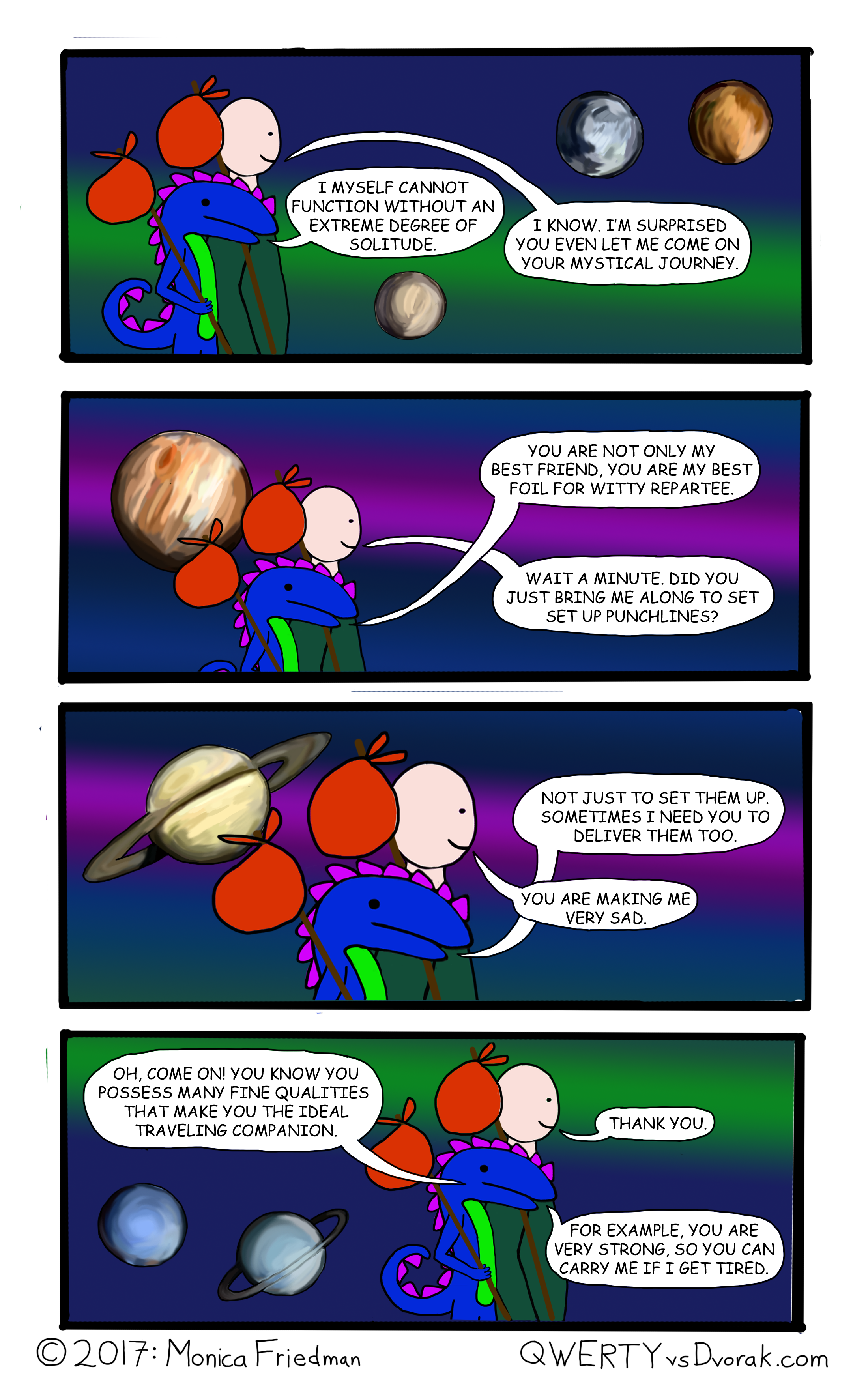 Lost in time, lost in space, and meaning.

Here’s something you haven’t seen since last May: new Dragon Comics! When we last left our heroes, they were on a mystical, if peripatetic, journey. And I wrote a 2-week story arc for this part of the journey last spring and never got around to drawing it because I was drawing something else 25 hours a week and that was all the drawing my thumb could take. But now I have some time I’ll probably get this comic to some sort of plateau.

Truth be told, Dragon Comics aren’t what they used to be. Not only can I draw much more impressive webcomics than I could when I started this strip, so much about the relationships in the comics has changed. The Missesses Kitty are divorced, the Fox and the Otter are married and they have a Wolf-Deer in the mix. The Man and I are still on a mystical journey, but a lot changes in 3 years. I don’t know if I should think of a new iteration for the comic, or just move on to another kind of story. My friends have always liked this comic, but the rest of the internet seems more impressed by the other comics I draw.

Still, there’s a bit more of this story to tell, at least. Maybe it’s a good idea to keep it in reserve for when the plot needs to get a bit more metaphorical than comic. 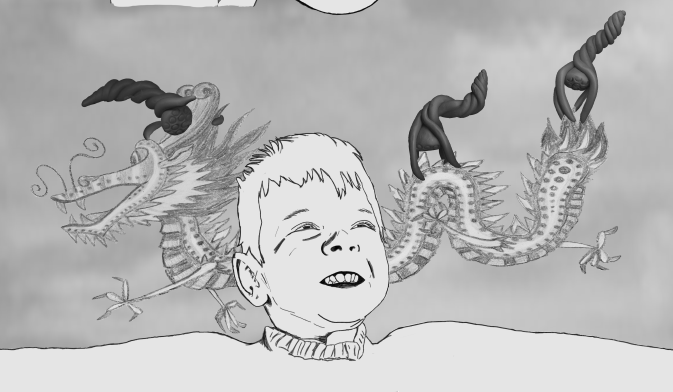 As usual, my process involved poor time management, overly complicating simple steps, and worrying a lot while checking out of the rest of life, but after 2 months of planning and 6 of work, here is one complete panel I like from “Close Encounters of the ∞ Kind.” This is why this blog looks like it’s been abandoned. I did draw 1 QvD comic in the last couple months but Miss Kitty thought it was a little morbid and anyway this is what I’ve been doing 25-30 hours a weeks for the last 3 months, a little piece of it. Hopefully, it all comes out looking as much like my imagination as this panel. There’s still at least a month of work before I’m happy with the entire comic, which will be 8 pages long.

So, this blog is not abandoned. It’s just on hiatus until I draw something I can share. 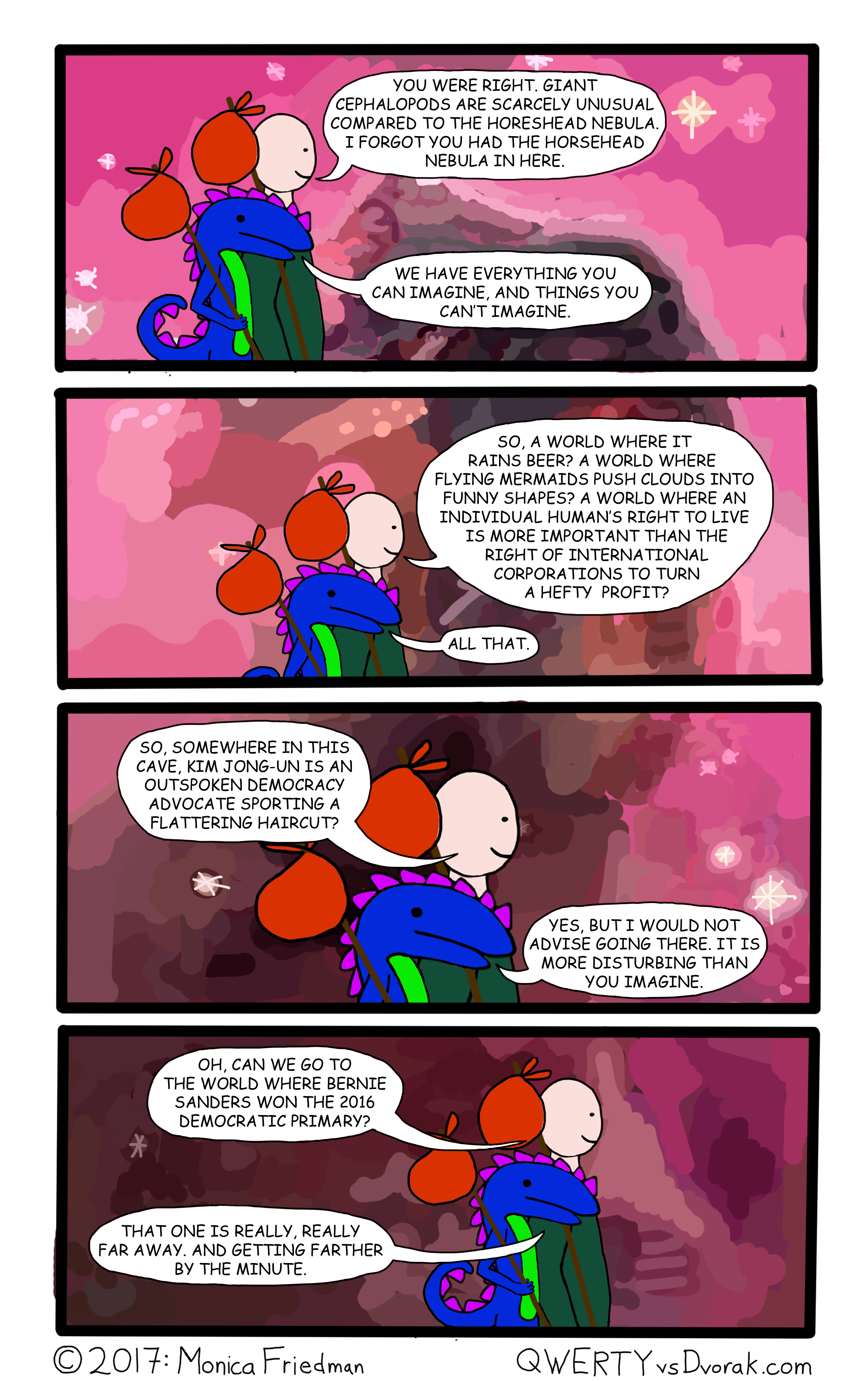 The Horsehead Nebula is actually a lot smaller than you’d think.

The Horsehead Nebula is definitely made out of cotton candy, right? The one is Dragon’s cave is, anyway. 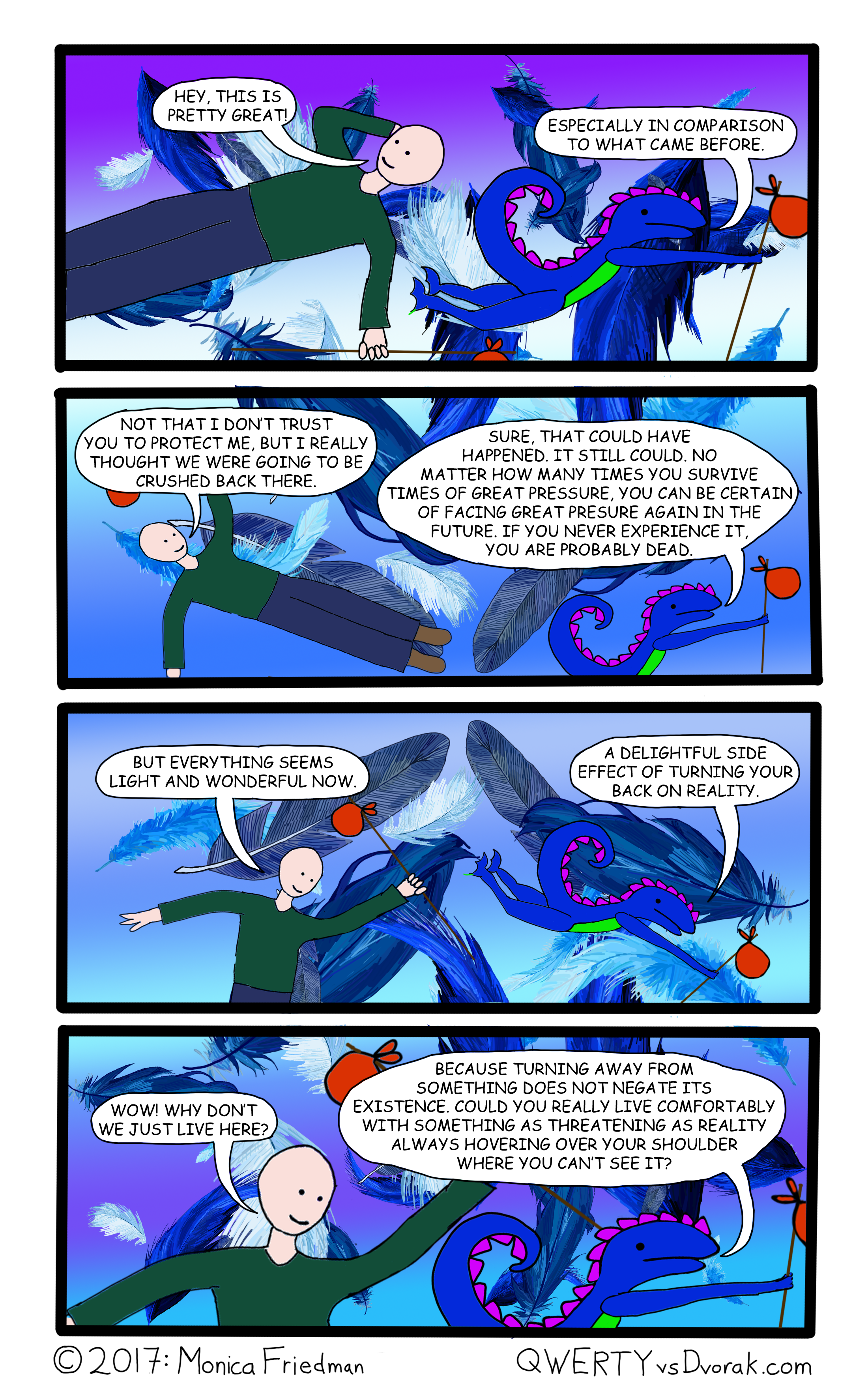 Light as a feather, thick as a brick.

You’ll have to take my word for it that all those background feathers looked way more amazing without the rest of the comic. But you get the pictures. Those are feathers. Everything is floating after getting through the great pressure of the molten core in comic 161. Mmm…allegory. These feathers took way too long to draw. Dragon flying was fun. The Man looks comfortable, but he usually does. 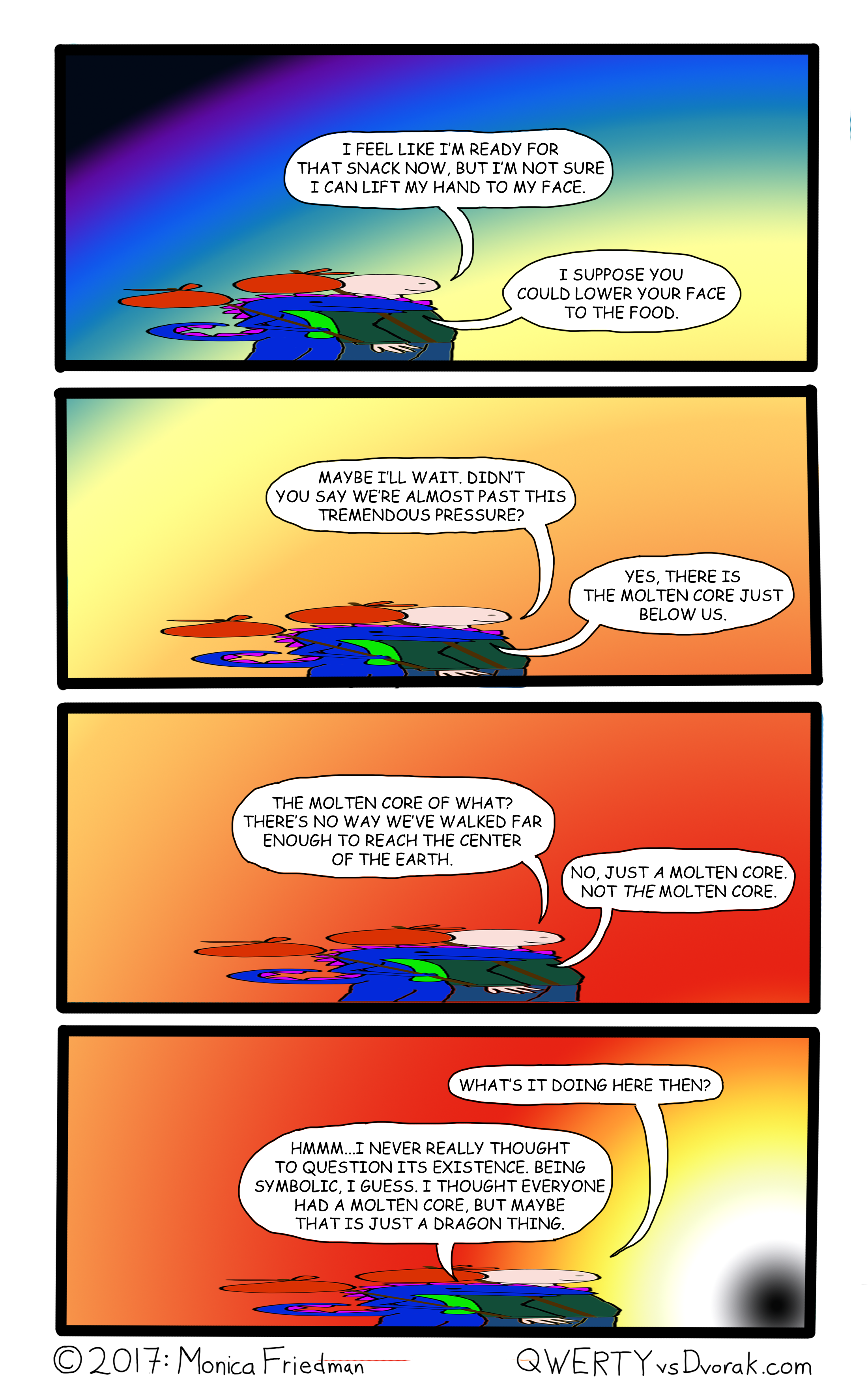 This gag is moving in several dimensions.

Wow, a comic finished before midnight? This one was pretty easy, obviously. They’ll get a bit more visually complex, presently. The kids’ custody schedule got flipped for the week and I somehow scheduled 3 times as many social engagements as I would in a normal 7-day period, so my entire groove has been disrupted. Fortunately, it was possible to write 8 comic scripts at the Fox’s on Tuesday, so at least the words are already taken care of for a while longer.

Have a great weekend. Dragon out. 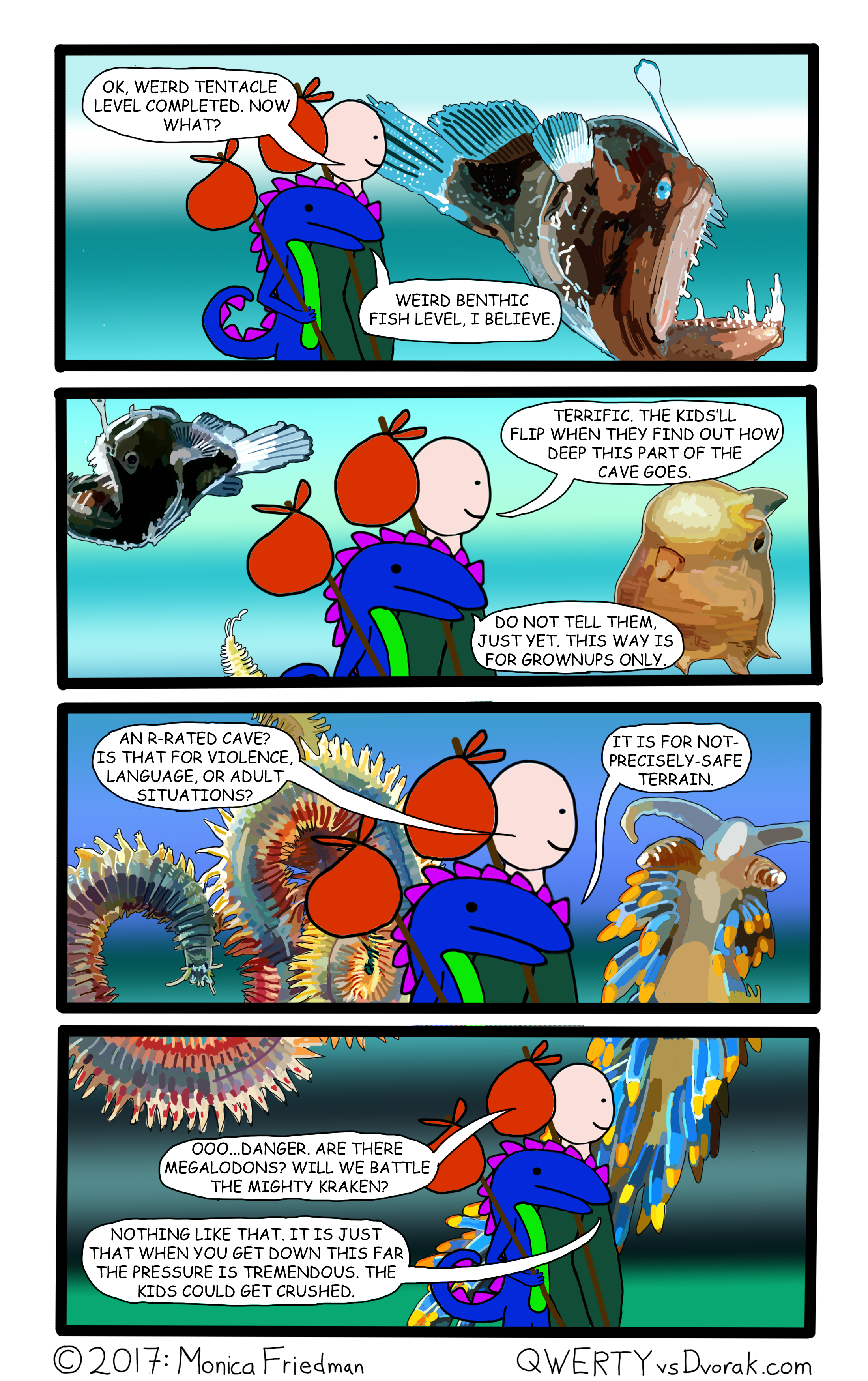 I hope you packed a harpoon gun, just in case they do release the kraken.

This is me: Let’s spend about an hour or so drawing a very simple comic tonight so there’s time to work on other projects before bed. This is also me: Let’s draw rainbow-colored nudibranchs. I hope the 5 hours I spent on this (wait, what? how?) was worth it. My hand hurts. Nudibranchs are the best though. Some of the most colorful organisms on earth, and they have no sensory organs that perceive color.

There was supposed to be one tentacle in panel 1, maybe reaching out for The Man’s head or Dragon’s bindle of holding or something like that, but this comic got quickly out of hand.

It really didn’t feel like 5 hours but the clock says it’s almost 3 a.m., and Netflix played 2 entire films while I drew.

At least I don’t have to get up in the morning. Yesterday I woke up 5 minutes before I was supposed to read to kindergarteners 3 miles away. Miraculously, I was only 10 minutes late, but I was busy the entire day without rest. It’s probably time to stop blogging now.