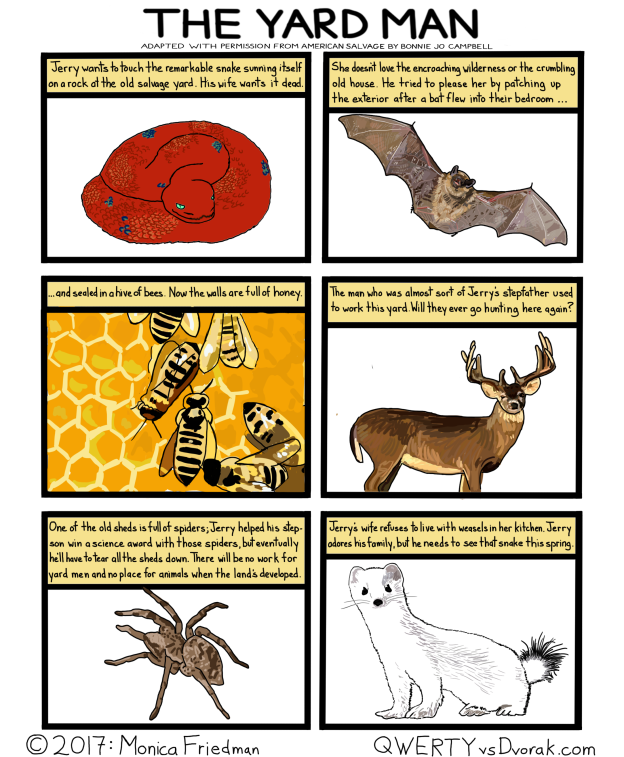 How could anyone fail to be charmed by an ermine?

As with last year’s “Daughters of the Animal Kingdom,” I knew that I’d have to only draw animals in this comic, but, as with “Children of Transylvania, 1983,” I knew I’d have to excise huge swaths of the story to fit it into 6 panels, especially if I was going to insist on making the animals the focus of each panel.

In “The Yard Man” we see one major theme of this book, which I categorize as, “Heteronormative Men Who Really Like Women but Aggressively Don’t Understand Women.” In Mothers, Tell Your Daughters, the main characters often seem crippled by a stunning lack of self-awareness, but in American Salvage the men tend to know who they are and what they want (love), they just don’t understand the people (women) they are trying to get that love from. Anyway, I’d call this story a little sad: Jerry and his wife are living apart by the end. Jerry still loves her, and he’d probably follow her if she asked him to, but she doesn’t ask, and he really, really, really wants to see that snake again.

I have to apologize for that snake. My picture does not do it justice. I probably should have drawn it as a red blur moving through the grass. Bonnie Jo reminded me that snake’s identity is meant to be a mystery, but the snake is not a symbol. It’s just a snake, she said. Pretty proud of that ermine, though.

As I told the Rabbit, I see both sides of the issue. The creatures are amazing. There is poetry to a wall full of honey, to an ermine returning to land where ermines have not been seen in years. But also, you can’t live like that, with bees inside. When I lived in Michigan, I had to help a friend remove bats from his house a couple times, and I had encounters with deer, snakes, and spiders. Never had any problems with honeybees, though, and I’ve never even seen a wild weasel. Once, in Kalamazoo, I was out in the woods. And you know how sometimes you’re walking in the woods and you step on a stick and it makes a loud crack and suddenly some deer, which you never even knew were there, jump out of the undergrowth? I had the opposite experience. I was standing quietly in the woods not noticing some deer walking along the ridge and one of them stepped on a stick and the crack startled me and I jumped a couple feet in the air. I could see the deer peering down the ridge looking at me like, “Isn’t that sad? Poor, dumb animal.”

When I told the Fox that I was gearing up to write volume II of Bonnie Jo Campbell Comics, he told me that after I finished the first one I swore I would never do anything like that again. I literally have no recollection of saying that. It’s probably like having a baby, where your brain blocks out the level of pain you experienced so you’re not too terrified to do it again. I’m not terrified at all. After spending 300 hours drawing 8 pages for Linda Addison, an estimated 56 hours to draw 14 pages sounds like a cakewalk.

It seemed important to keep the style consistent between the 2 books, meaning I’m back to hand-lettering, which is very time consuming, but didn’t take as much time as I remember it taking. At any rate, I realize that even reverting to conventions like drawing most of the lines with a massive weight of 4 pixels and making people’s eyes look like tiny dots in any face that doesn’t take up the whole panel, I can’t revert entirely to the style in which I draw last year, because I learned so much in the process of drawing the first book that no matter what I do, the drawings are going to look better.

Another thing I noticed as I wrote the text was that my brain let go of the idea of summarizing. I’m not telling the story the way I did with “My Dog Roscoe.” I think this is Linda Addison’s influence, because everything she does is about poetry, including her prose. This comic seems to have more poetry to it than the early comics in the last set. It’s about “The Trespasser” but it doesn’t exactly tell you everything that’s in “The Trespasser.” It seeks to communicates the feelings and theme of “The Trespasser.”

To my mind, it’s a story that functions through juxtaposition. There are 2 girls who never meet in person, but who are heavily influenced by the artifacts of each other’s lives, and we’re forced to compare and contrast the characters while they are comparing and contrasting themselves, so that dictated the layout of the comic. This story is really rich in symbols, too, and it was hard to choose which ones to use. In particular, Bonnie Jo spends a lot of time describing the objects moved by the 16-year-old, but I think the portrait of the 13-year-old with her gymnastics trophy surrounded by bronze animals gets at the heart of it. I didn’t realize that bronze figurines of dinosaurs and farm animals were common things to collect, but according to Google Image Search, they must be.

A lot of people think of American Salvage as being a more androcentric book, but this story feels connected to the themes of Mothers, Tell Your Daughters. Don’t worry, we’ll get to the plethora of dudes who don’t understand women soon enough. 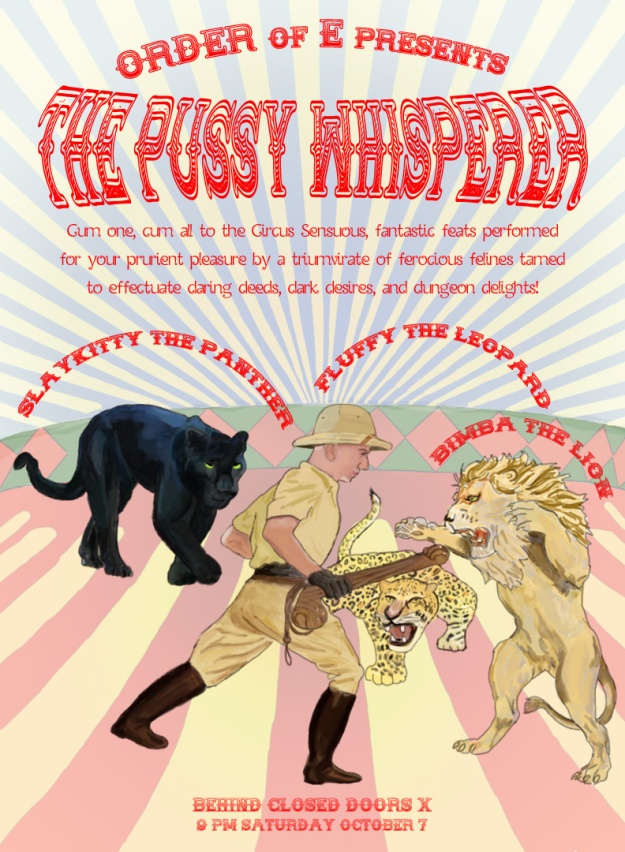 In keeping with my new principle of not censoring the fact that I am an adult who participates in as well as illustrates adults activities, here is a little promotional flyer I drew and wrote for an upcoming event. The Coyote referred to this piece as “X-rated,” but I give it a soft R at best. The language is the sexiest thing about it. Writing the text was a lot of fun. My love of alliteration is one of the things that got me through 6 years of copywriting. If only all the products had been circus-themed adult events, maybe I wouldn’t have burned out of that job.

For this piece, I downloaded 2 new fonts: Medicine Show Caps and Cirkus, both of which are adorable. I referenced many old circus posters as well as images of big cats and spent a lot of time trying to get the background to not overwhelm the foreground. There is a particular artistry that goes with this circus style of poster, immediately recognizable, immediately eye-catching, slighting disorienting. The idea of a circus is to put you in a particular emotional state: altered, receptive, heightened…. The imagery is the beginning.

So, if you know anything about TUSD, you probably know that, like most Arizona school systems, it’s terribly underfunded. The PTA has to hold fundraisers to buy toilet paper and pencils. Infrastructure upgrades are few and far between and administered at the whim of people downtown who don’t tend to solicit a lot of opinions from those on the front lines, as far as I can see.

Anyway, they upgraded the PA, the bells, and the clocks. None of the old clocks kept reasonable time. Some of them didn’t work at all. And thus, we had 3 “time zones” in the library. So, they replaced the clocks. And with every clock they replaced, they left the corners of a square hole in the wall uncovered. I could barely see the holes, because I am so short, but a lot of the teachers seemed annoyed. One of them suggested cat ears could fix that, so I made some cat ears. The hardest part was reaching the clock. The step stool was too low, so I had to carry an old desk across the room. Later, I realized the desk’s heaviness was due to it being the storage facility for numerous reams of printer paper. Good thing I’m stronger than I look.

In other news, I have a new Patron! Thank you, Dave G.! It’s especially nice given that I’m not updating 5 days a week anymore. I lost 1 patron when I stopped regularly updating. But I’m still using this blog. I just have more work than I used to have, and not all of it is blog-worthy. If you would like to join the small but loyal crew of people who give me $5 (or more! or less! anything helps!) a month, you can pledge to my Patreon right now!