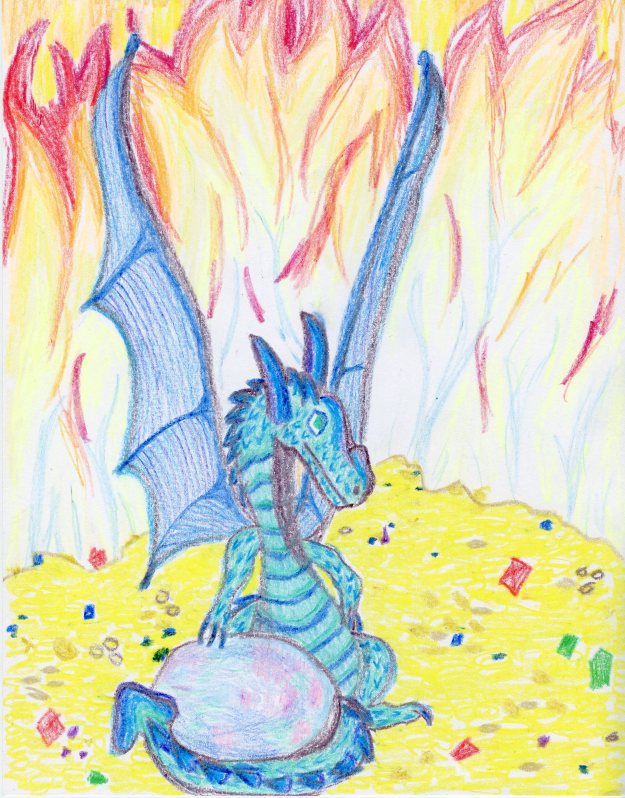 Usually I name my crayon dragons on the drawing. I think this one’s name is Kissa. Should have put her name into the flames, actually.

Wrote  a script for a comic that had been blooming in my mind for a few days and then started to second-guess myself and decided to check my sources, so to speak, before drawing it. Certain recent events weigh heavily. Anyway, I couldn’t have done justice to the subject matter in the time available.

Instead, I settled on something I used to do all the time, and haven’t done in a while: dragons in crayon. And still, you would not believe the tribulation. I wanted to sit on the floor, but had to adjust the lamp to shine on my workspace. But somehow, I knocked the lamp over, breaking the bulb. Fortunately, although it cracked and no longer emitted light, it stayed in basically one piece and was easy to remove.

Then I went to the closet and got another bulb, but it was so well-packaged that I had difficulty getting it out of the protective packaging. Eventually, I dismantled the entire box, but the bulb was still secured in the cardboard. So I gave it another tug, and it went flying across the floor, shattering into a million pieces. Now I had to get another bulb and install that just so I could see well enough to sweep and vacuum the broken glass in order to safely sit on the floor. Probably end up mad as a hatter anyway.

Finally, I was able to draw this majestic mother dragon guarding her precious egg atop a golden hoard. Classic.

Per usual, I would be eternally grateful if you considered supporting QWERTYvsDvorak by buying my book, supporting my Patreon, or ordering my merch.