As soon as the library sent me the reserve notice for The Trickster’s Hat, I was eager to jump in. Some of the exercises involved writing or other forms of expression, but the majority of them were visual, and I needed no encouragement. It was just what I wanted.

I didn’t love every exercise. Some of them were boring to me. Some of them seemed pointless. Some of them appeared geared to people with even less self-confidence in their creative ability than I had. But I did love a lot of them. Sometimes the ones I didn’t understand at first, or struggled with, or thought stupid, resulted in finished projects I could display with pride. 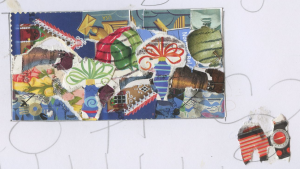 Exercise 3: Amass a quantity of postage stamps. Rip them up (no scissors) and create a small landscape without using any of the stamps’ design elements as the thing they represent.

Almost instantly, I was able to focus on creating, setting aside a big block of time every night, looking forward to that time and curious about the next exercise in the book.