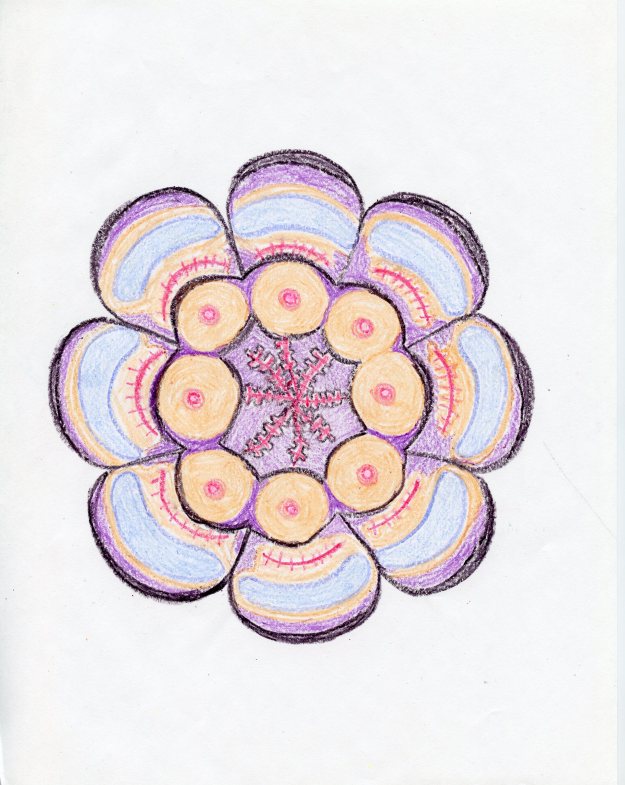 Breast cancer turned my friend into a comedian. “Last year, my boob tried to kill me,” she says, “so I killed it first.” Then she makes a kind of ninja sword slicing sound–“Wah-CHAA!”– while whipping her hands around and everyone laughs. Because the alternative is worse.

I seem to average about 2 friends surviving breast cancer a year. I don’t know anyone who hasn’t beaten it yet, but it’s a rough year and people keep doing battle with the monster. This mandala was actually drawn in honor of my mother-in-law’s victory, which was several years ago, but I probably know 10 people who’ve dealt with it since then.

It’s a good thing a strong mandala came up today, because I don’t feel wholly prepared to start up another year of webcomics and art blogging. This is because I had what I think of as a “mom vacation,” which means that everyone around me is on vacation and my workload actually doubles because everyone’s around all the time and everyone needs things from me and by the end of the day I’m too intellectually worn out to actually create anything, which then enervates me even more. So, since I can’t afford to go away for a couple days by myself and sit in absolute silence without taking care of other people, my “vacation” will actually be going back to business as usual.

Maybe I’ll draw a comic about it. Or maybe I’ll use the ridiculous gag my brother sent me yesterday, because who doesn’t like lame, esoteric puns?

I’ve also got a New Year’s bulletin board to hang. And about ten thousand other things to do.

So it’s even odds as to whether tomorrow you’ll get a comic or some macro photography. It’s such a massive surprise even I don’t know.