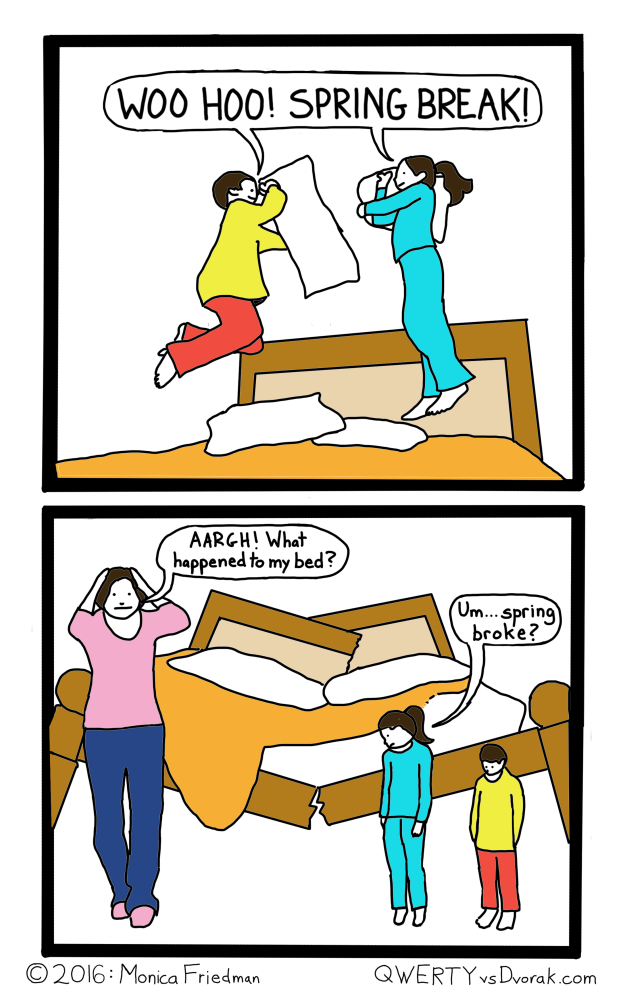 Mom’s gonna be spring broke, too, once she’s done paying for a new bed.

Come for the political/nerd mashup humor, suffer through the dead baby jokes, and stay for the light-hearted child-friendly puns. We’re all over the map this week.

It is spring break, which means 1000s of extra tourists clogging up our roadways, and kids home all day. They’re too old for jumping around and breaking things, though. They’re at that age where you have to outwit them just to get them to look up from their devices. But I got them excited about making cheese, so we did that instead of spending the entire day staring at screens. We made a block of paneer cheese, a 1/2 cup of ricotta, and a quart of whey. Actually, I think we ended up with more whey than the amount of milk with which we started. It’s a cheese-making paradox.

I was going to make some finger paneer, but one block isn’t all that much cheese, and after the kids ate their share, there wasn’t too much left. But now I really want some finger paneer. We had planned a communal dinner with some friends, and I ended up making spinach mushroom pakoras. At our hosts’ house I conjured some apple chutney out of the stuff they had in the fridge, and also salad dressing, which I whipped up on the fly because nobody brought any. Also, strawberries and whipped cream for desert. Other people made Indian curries, salad, and rice. And then, once again, it was late and I hadn’t even considered funny ideas for comics, and this is what I got.