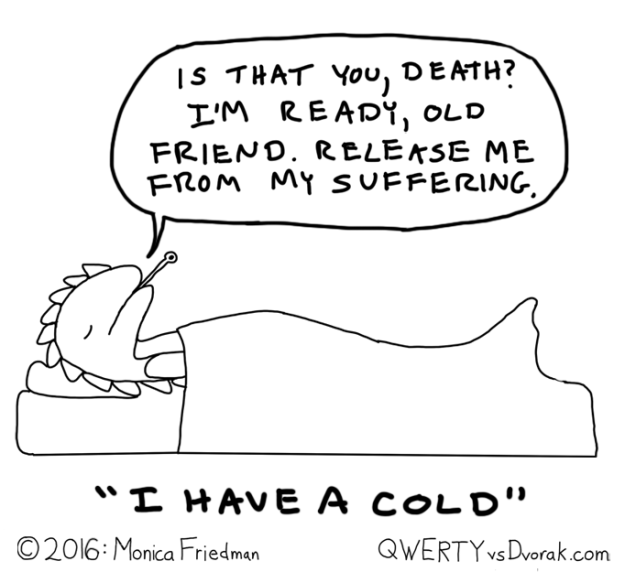 Ain’t no rest for the wicked.

When I was a kid, I used to fake being sick all the time. I hated school with its rigid rules and social structures, where I was frequently bullied and rarely interested. Middle school was the height of it, and even though my mom was pretty suspicious, I managed to get away with it more than half the time. The old thermometer against the light bulb trick. I don’t think you can do that anymore, not with digital thermometers. The trick with the mercury thermometer was that you had to shake it back down because there was no way Mom would believe in a temperature of 107. The sweet spot is about 101. Too sick for school, but not so sick that you would need a doctor or an adult to stay home and look after you.

Now, of course, I fake being not sick all the time. Like every day if you count ignoring chronic and basically untreatable conditions that affect my performance as I move through the world. But after a couple days of a chest cold, it’s hard to play tough. Yesterday I got through the day (getting up 2 hours early, traveling almost to the border, being on as a speaker for 2 college classes, being on as a friend through lunch with the other speakers, and through the afternoon, and then riding back and then running errands with The Man and then being on for more people and for dinner, after which I was at negative spoons) with a lot of medication along with the help of a handy TENS unit, but I also passed out long before midnight. And today I have more important things to do, and have to keep pretending not to be sick as long as possible. But I still wanted to update my blog with this very important comic before I try to repeat my performance, except with 2 kindergarten classes instead of 2 college classes, and slightly less traveling (but lots more driving).

Just sneezed all over my screen and keyboard. Gonna be a long day.