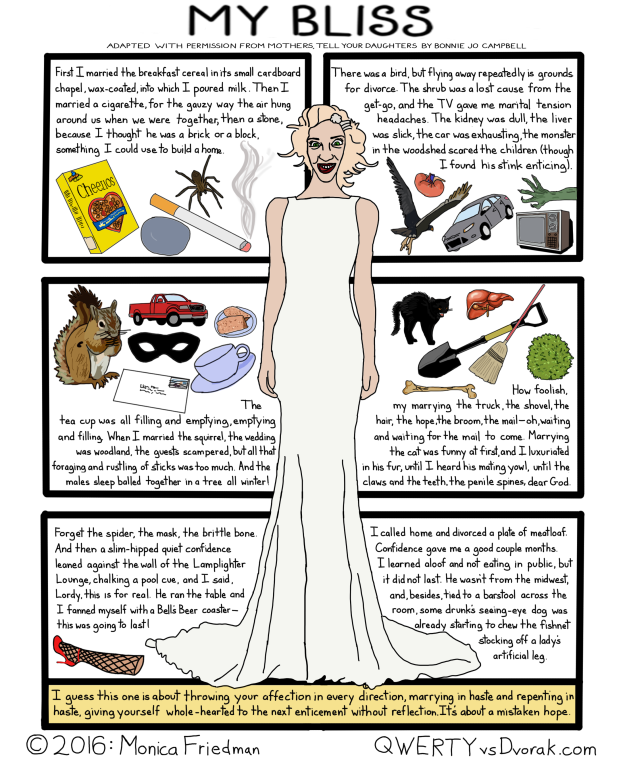 I get wanting to be married once, but I don’t understand how anyone could do it 25 times.

Originally, I thought this would be the hardest story to adapt to comic format. Even though it’s a very short flash fiction–that’s literally the complete text in the comic–it leans toward what I would call “experimental” and doesn’t lend itself to summary. Like, what would the yellow box say? “A woman claims to have married a variety of inanimate objects and non-human animals”? That’s not a story.

Admittedly, when I first read the book, it was my least favorite piece. I thought it was too precious, too blithe. Drawing this comic helped me see it in a different perspective, though. The narrator is much like many other characters in Bonnie Jo’s books: clueless about relationships. Once my brain delved into the layers of the story, the way to adapt it seemed obvious.

My first stylistic idea was to use the full text as a background and draw everything on top of the words, but that makes it even more experimental. If you can’t figure out what’s going on with the entire story, you’re not going to get much out of the entire story with half of it covered up. But as I started writing out the actual words, the idea of putting all the pieces, words and images, together with only one sentence of commentary from me seemed like the way to go.

It’s entirely possible that I have it wrong, and this is not what the author intended.

Then again, I know people like this. The next thing is always the thing. Whatever catches their eye, that’s the thing that’s going to save them. And they drop what they have and run after something new. A lover, a job, a hobby, a car. It’s not really the lover, job, hobby, car that they’re chasing. The reward is hope, because it’s easier to maintain hope about something new and totally unknown than it is to focus on all the problems and obstacles in your current situation.

There are always obstacles, though.