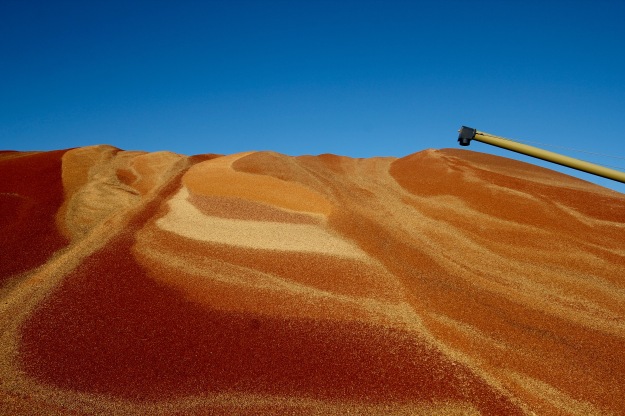 I risked frostbite to bring you this image.

We saw this huge pile of seed sorghum–milo, if you like to be specific–by the side of the road in Kansas, just in the last hour of sunlight, glowing like (The Man and I agreed) the sand dunes at Death Valley and the hills of the Painted Desert combined. I took about 100 pictures, most of which were pretty breathtaking, and settled on this one with the grain auger visible (top right) to represent the set. The different strata are caused by the different weights of the parts of the grain, the chaff and such. Every section shifted into its own spectacular pattern, so choosing a favorite wasn’t easy.

There was also a lovely field just to the south, all full of rolled hay bales. It was cold as a narwhal’s nose but at least it hadn’t snowed in that part of the world, as it had in Denver the day before, rendering all my pictures washed out and gray skied. It’s a long story, why I didn’t update Friday, but this is Friday’s update.