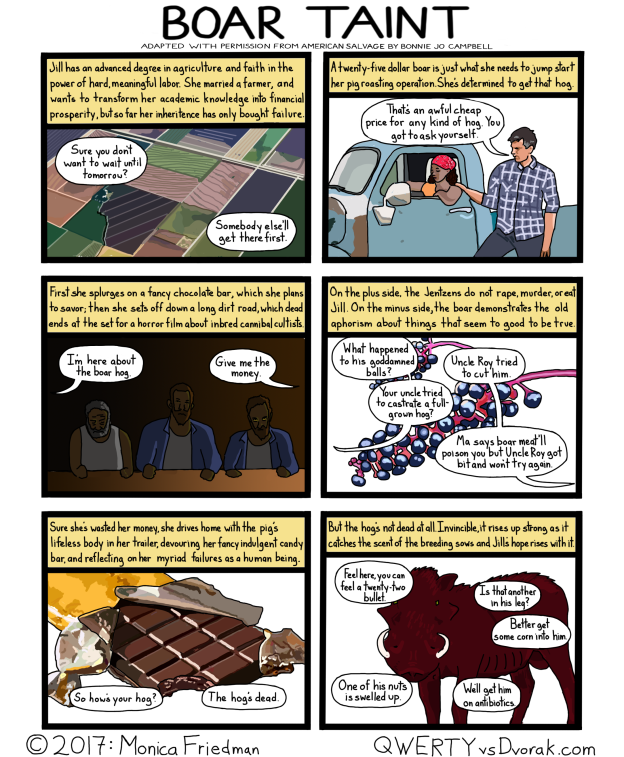 Jill is probably the Bonnie Jo Campbell character with whom I most strongly identify, because we’re both idealists who believe that, armed with only our advanced degrees and our own sense of self-righteousness, we can accomplish anything. Also, we both swear we’re only going to eat one square of dark chocolate a day. And then we both become overwhelmed with self-loathing when we fail.

I ended up cutting out more of “Boar Taint” than I intended, particularly the parts of the story that involve Jill’s awareness of being a woman surrounded by men, and of her concern for the Jentzen woman, who appears to be the only female in a household comprised entirely of men, who, presumably, are all inbred cannibal cultists. Speaking of which, those inbred cannibal cultists came out great. (Note: the text does not ultimately support the cannibal cultist theory, but it does give you the sense that Jill is walking into Texas Chainsaw Massacre or The Hills Have Eyes right up to the point where she drives off with the boar hog.) Also, the panel in which Jill’s husband (his name is Ernie, and the story also lets us know that he and Jill are really in love and spend every night humping like rabbits) tries to gently explain to her that nobody is selling a high quality stud pig for 25 dollars looks pretty sweet.

Anyway, that’s a wrap on American Salvage. It took twice as long as Mothers, Tell Your Daughters but the illustrations are probably twice as good. I gave myself a deadline of New Year’s Eve to finish the 14 stories in this book, because then I wouldn’t have to change the copyright date on the bottom of my template. Deadlines are helpful. Next year, I’ll create the cover and some other supplemental material, and I understand Bonnie Jo wants to bring the print comic out in time for a literary festival in March, so look for Bonnie Jo Campbell Comics v. 2 in the spring. Fingers crossed, next year I’ll get my chance at Women and Other Animals.