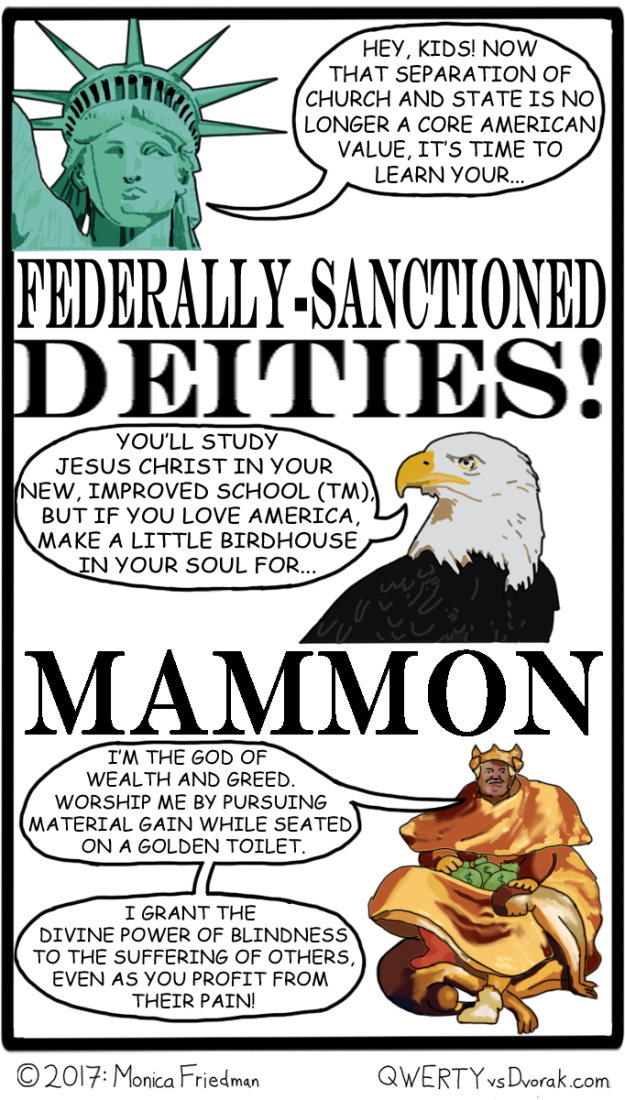 As television taught me as a child, the more you know…

I can’t take credit for “School (TM),” which is, of course, from M. T. Anderson’s dark future YA novel, Feed. At “School (TM),” the protagonist and his friends learn valuable lessons in consumerism, primarily concerning how to get the best deals online and buy more things. The phrase “make a little birdhouse in your soul” is from They Might Be Giants album, Flood.

There can be no doubt now that, with the exception of a few holdouts, the federal government’s agenda is to pillage and plunder the country, extracting non-renewable resources for personal gain while also appropriating public funds into their own coffers and charging the American people to spread their own narrow worldview. And unless you have a couple million to spare, you are going to find yourself crushed under the gouty foot of their insatiable greed. If you don’t understand, I recommend a Dr. Seuss’s seminal treatise on the results of unchecked growth in business without some sort of agency for the protection of the environment.

And speaking of money, let me do my civic duty by reminding readers that they can participate in the national past time of capitalism AND support a struggling artist by buying my book, shopping in my online store, or donating directly to my Patreon. If you enjoy my content, believe in freedom of speech, and have a job, please vote with your wallet and kick a few dollars my way. I’m not too greedy, but I could use new socks and underwear, and would like a pair of jeans with no holes. Today, in a thread about ACA and profit in healthcare I questioned the foundational American belief in the nature of capitalism and decided not to respond to a comment about the futility of trying to “escape the trap of money” in a “ridiculously hedonistic, unhealthy narcissistic society” written by a woman who listed her current occupation as “artist” (she apparently worked in gems and precious metals) and her previous occupations as a manager of a Lexus dealership and “private jet broker.”

This is why some people don’t think there’s any room at the table. Because someone took up all the space with a private jet.

The woman in question seemed to consider herself fairly liberal, politically speaking. I didn’t know her, except I felt like I did, because I grew up in  place where money–not just enough money, or a comfortable amount of money, but ALL the money, as much money as a person could get, and then more money on top of that–was considered paramount. Not that they were bad people. The rich people I grew up around gave lavishly to charity and voted in favor of social services. But they lived in another world, and their children didn’t understand how ridiculously much more they had than everyone else. They knew they were rich. They just didn’t understand how poor so many people were.

This weekend I had a couple comic ideas around the theme of people debating whether or not the president-elect is fascist, whether the people who support him are nazis, and my thought that this kind of labeling/identity politics/name-calling is pointless. I don’t care whether or not a regime’s qualities align 100% with those of the 3rd Reich. I do care whether or not their actions result in .01% of the atrocities of World War II. So I’m trying to stay focused on a discussion of what people do, whether it is kind and helpful or selfish and greedy.

I maintain that 1) money is only one possible way of dividing resources, not a necessary evil, but a cultural system that exists because enough people want it to exist, and 2) that there are sufficient resources on planet Earth that everyone could have everything they needed if we all chose a more equitable way of distributing good and services while communicating the value of community and meaningfully contributing to society, but that 3) the reason we don’t usher in a true utopian era is because most people are greedy and selfish.

We’re almost all at least a little greedy and selfish. Even if we love our fellow human and wouldn’t personally wrong them, we accept a system in which some people can be a lot greedy and a lot selfish and love their fellow human not at all, and have no compunction about personally wronging them if it could be done for profit and power. We say it’s OK for one person to earn a private jet while many more people cannot earn homes for their family and food for their children even though they work 40, 60, 80 hours a week. We don’t have to accept this system as the only possibility, but the vast majority of us do. We could change that. For sure we could work out a system where everyone receives healthcare.

I’m afraid my Alice looks too much like Janet Jackson. I was going for Latinx. But you know I made the Hatter’s hands small on purpose. That’s not like calling someone a fascist. That’s comedy. The Putin-Hare kind of creeps me out. Also, I did this Tenniel drawing before, in a Dragon Comic. I already had the “Alice in Wonderland” tag. 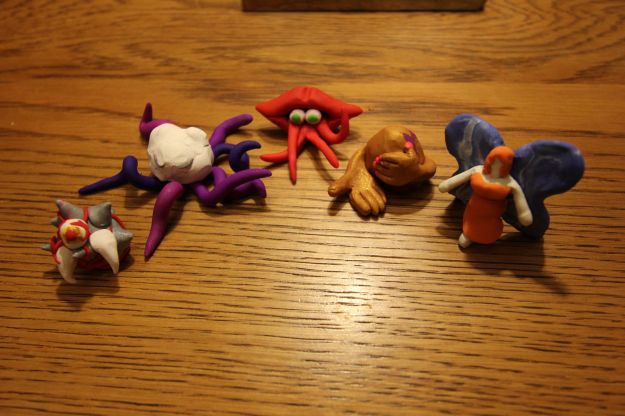 Felt like working with my hands and taking a break from the tablet and webcomics, so I reached for the Sculpey, and, as inspiration tends to steer me, went to the weirdest place. 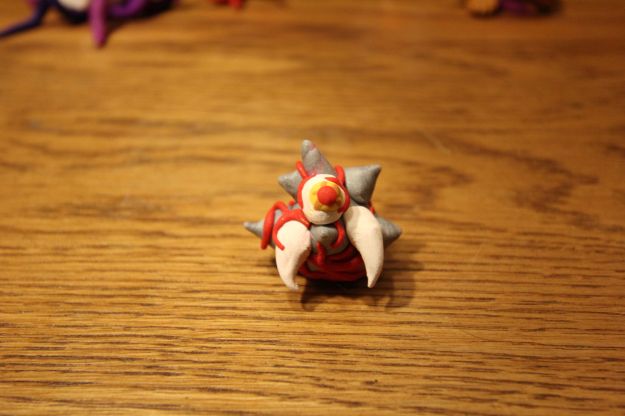 Here we have some metaphorical, 3-dimensional representations of my demons: Chronic Pain and Insomnia, Foggy Delusion, Insatiable Desire, and Crippling Self-Doubt and Depression. And then, because I have read the classics, I added Hope, who is either the blessed relief vouchsafed mankind by kindly deities, or else the worst curse in the box. Either interpretation is considered correct. It simply depends on your philosophical outlook. 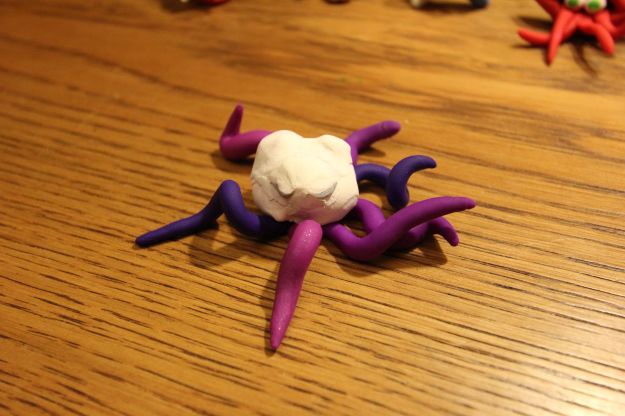 Now I can also make 3-d comics about the physical embodiments of all the emotional handicaps that have held me back in life. Ha ha. Although first I guess I better make a Monica figurine for these guys to plague. 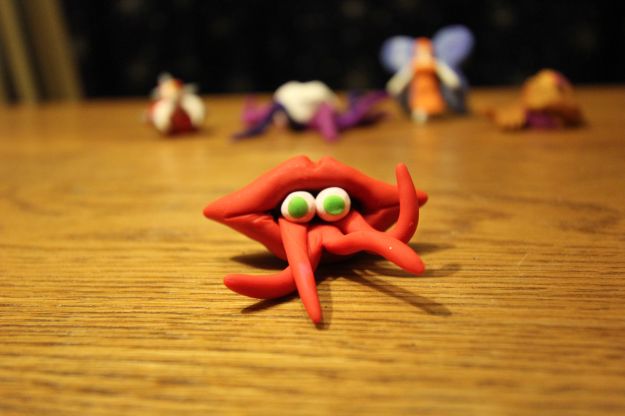 To tell the truth, working on the computer all the time kind of makes me lazy, both in terms of the way I lean on the myriad available tools rather than my own artistic sense along with the overall degree of creativity I expend on a particular idea. I might try to get some stuff done on paper, with a pencil, in the near future. 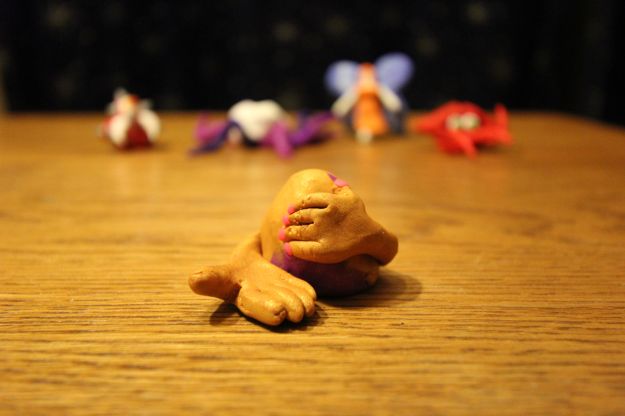 Formless hopelessness, one hand covering shame, the other reaching out for help

There’s a school of thought that suggests welcoming in weakness interrupts its power over you. If you accept problems, instead of combating them, you can move on with your life. 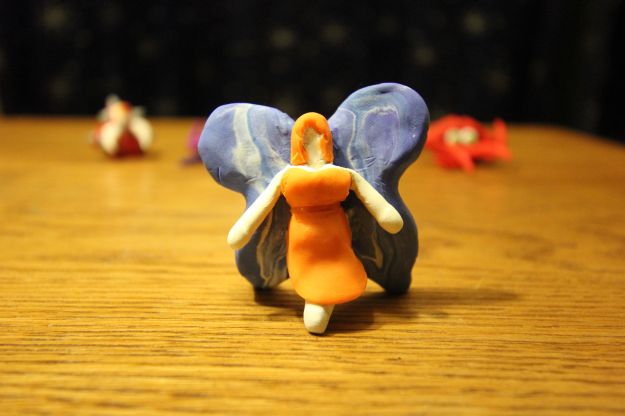 I sort of started storyboarding a comic about depression, but it almost feels exploitation and derivation. Everyone does depression comics, right? In reality, no force in Equestria could have compelled Spike to return those birthday presents.

This sequence amused me to no end. I’m hoping for another 3-strip inspiration over the weekend, but if it doesn’t come I might take some days off from blogging next week to get caught up on some writing projects, specifically a couple longform book reviews for the Best Children’s Books website and a couple of comic book articles for Panels. Plus, I’d like to start another big project I’ve been wanting to do for a couple years. I’ve set a deadline for myself on this one, so there’s a good chance that it will actually come together. Especially now that I’m learning Photoshop, ideas that seemed really complicated to execute feel much more manageable. Everything erases in Photoshop, and when you put things in the wrong place, you can just pick them up and move them. I wouldn’t even have to sketch out a separate rough draft.