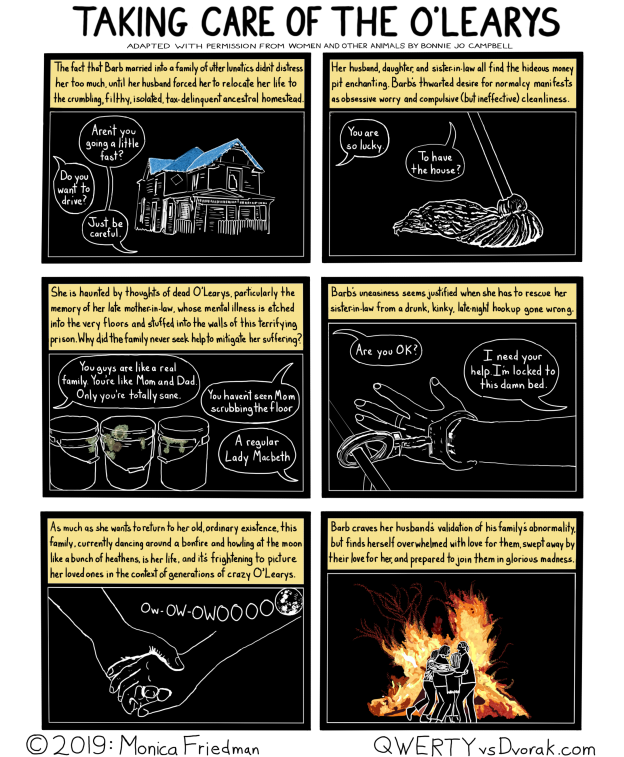 Mental illness doesn’t run in the family so much as it line dances there.

I find “Taking Care of the O’Learys,” achingly beautiful, in the way that audiences are taught to look at life while watching Our Town, except with moldy potato water buckets and inebriated bondage. Barb could leave—other women might, like the wife in “The Yardman,” —but she has a moment in which she’s wholly open to love, and in letting it in, she understands that it’s paired inextricably with the general weirdness she’s been resisting, and that it’s not just doable, it’s actually wonderful. The madness isn’t anywhere near the worst thing that could happen. Losing your family is the worst possible thing. She wouldn’t really leave anyway. She’s the kind of person who keeps washing the floor even though she knows she’s done her utmost and it needs to be replaced. But she did need to be reminded of how much they loved her. It’s a happy ending with madness.

To heighten the implied creepiness and Barb’s sense of terror of the first part of the story, I decided to flip black and white, and only use a very few colors. Probably the colored parts will look less awesome in print form but they looks amazing online: blue tarp, green mold, red, orange, and yellow fire. Quite pleased with this one. No, seriously, though, I can’t believe it. Did I write this? I don’t remember writing this.

No sleep 2 nights in a row? You know what that means. Insomnia comics! Somehow, in the fog of sleeplessness, the confusion of juggling 3 projects, and the haze of constant low grade worry surrounding a delightful variety of life issues and unfinished business, this comic spewed forth from my brain. I was literally writing something else, an article that was supposed to get filed last Wednesday, and then somehow I started making this comic. My mind and fingers started making this comic without me.

Best guess, it only took about 45 minutes start to finish. I really don’t remember, but the clock seems to line up that way. In this state, it probably would have been 4 hours had I decided to hand letter it.

And that’s just what comes out of my head. Don’t even ask about what I’m keeping inside.

This comes out of two things. One is that, knowing my tendency to second guess myself, I try to force myself go with the first thing and then worry about it until given reason to stop. So, when I drew yesterday’s comic, the thought crossed my mind that something that came to me in a dream might not be a good idea in the waking world, but I went with it anyway and then spent all night worrying that it was too dark, too grotesque, too confusing. And then people related to it anyway. (That’s supposed to be panel 2 from yesterday’s comic in panel 3 of today’s comic but it’s probably too small to see.)

The other thing on my mind was a dark comedy essay I wrote about 8 years ago for a pretty successful blog the Rabbit, the Bear, and I, and some other people used to have, until everyone drifted away and stopped posting. And we were getting pretty good traffic, too. Eventually, we stopped paying for the domain. For some reason, I thought the posts would revert back to Blogger, but that is apparently impossible. Someone is sitting on our URL and the same name on Blogger and I can’t figure out how to repost the articles even though I can see them and edit them when I’m logged in.

So, at the risk of exposing myself to utter ridicule, I’ll reproduce it here, but keep in mind that it’s super dark, and super sophomoric, and super sarcastic, and that I do not condone drowning children or making light of mental illness, and that I know this will not work (especially not now). I’m actually kind of embarrassed just thinking about it. But maybe I’m second guessing myself. Seriously, I wrote this in 2008. I’ve grown since then. Please don’t judge me too harshly if you don’t see the humor. I would not do well in prison.

The Devil Made Me Do It: Pleading the Insanity Defense or How to Get Away with Murder

****Disclaimer: if you are a complete moron, this is a comedy article. Please do not commit murder, and if you do, don’t tell the cops that Dragon told you how. And clear your browser cache.****

You can’t simply kill your enemies and claim to be cleansing the world of demons. Park Dietz, or an even funnier-looking forensic psychologist, will explain that you are a liar. The McNaughton defense is based on whether you comprehend the wrongness of your actions. Consider Jeffrey Dahmer, who was obviously batshit crazy, but still knew it was wrong to drill holes in his lovers’ heads. Dietz saw that Dahmer got drunk to overcome his guilt. Also, Dahmer lied to the cops prior to his arrest. Lying to the cops is a sure sign you know you’re breaking the law. If you want to plead insanity, you’ve got to tell the truth about your actions. In this scenario, the only thing you can lie about is your insanity.

But it’s not even so simple as that. If you make 200k a year, own a big house, lead a glamorous life, and off your annoying mother-in-law, it’s going to be pretty hard to argue that you really believed she was an alien. You’ve got to set up your insanity defense in advance. The first thing to do, if you want to get away with it, is worry friends, family, and coworkers.

Early stage schizophrenia is simple to emulate. Laugh at inappropriate times, like funerals and board meetings, or cry at inappropriate times. Deny your actions when accosted. Get paranoid for no reason and make groundless accusations of those around you. Allude to vague suspicions that you are being watched or have enemies. Don’t overdo it. Act generally normal and just bust out with these little personality tics a few times a week. You don’t want to end up committed before you commit your big crime. You want people to have nagging worries in the back of their heads, stuff they can tearfully recall at your trial, adding, “If only we had recognized the signs.”

Step two is a little crime. A really little crime. Something likely to make News of the Weird and set people to nervous laughter, something even the judge will agree to cover up. For instance, obtain a small dead animal. Remove your clothes. Walk naked through a public place clutching your small, dead animal. You will be arrested. Provided you are not rushing a fraternity or a member of Greenpeace or PETA, you will be declared mentally ill. Take it further by insisting your dead animal is a living child, or an accordion, or a letter of commendation from the president, and refuse to relinquish it until you are granted protection from the Pope, or Steven Spielberg, or your trash collector.

You will be rewarded with court-ordered psychiatric treatment. It’s free, and it’s likely to be a short stint! The downside is those psychotropic drugs really slow you down, and your state mental health facility is not the Bellagio. The food is crap and you have to share a room. But no one said it would be easy. You’re on the right track. The moment you start taking anti-psychotic medication, drop the schizophrenia act. Admit you were out of your head. Claim you’ve been under a lot of stress and you just want your life back. Agree with everything the doctors say. Soon, you will be free, at which time you can flush your meds down the toilet.

Now you are ready to commit a real crime. Don’t overthink. Premeditated murder does not result in a verdict of insanity. Careful planning indicates sanity. It’s got to appear spur-of-the-moment. Consider common household implements as weapons. Fit murder into the routine of your life.

Do not, at any time, act surreptitiously. If you are found to be hiding anything, you’re disqualified. If the jury knows you bought a new hammer and hid it on your boss’s bookcase, you can’t pretend something came over you just before you bash his head in after hours. You’re better off bludgeoning him with his own Blackberry during your weekly sit-down in a glass-walled conference room. Smile at your coworkers as you do so. If you have to drown your kids, do it in the bathtub with your cousin downstairs. Don’t lock them in a station wagon and push it into the lake in the middle of the night and claim, “A black guy did it.” Not only will you look like a cold-blooded killer, you’ll look like a racist. The jury will not sympathize.

Finally, let’s say you’ve committed the act. Don’t cover it up! This is the most important part. If you cover it up, this is evidence that you knew it was wrong. The best thing you can do is stay with the body of your victim until the police arrive. Confess immediately, with a big smile. Bonus points if you do the deed in front of a cop. That makes you look really insane

No bears were harmed by anyone other than themselves in the making of this comic.

I’m not a perfectionist, and I’m not vested in maintaining total control over the end of the process: my work is deliberately and lovingly flawed, and printing and shipping is up to someone else. LIke I said yesterday, marketing and sales are sort of beyond my bailiwick, and what bare interest I muster in the process only reflects a desire to continue spending 40 hours a week drawing and writing. (Obviously, I’m lucky to have The Man to support me in this endeavor, not to mention no small degree of class privilege.)

This comic is offered lovingly in honor of my friend, the bear, who creates marvelous and superlative designs, which he reproduces himself on delicate merchandise in custom colors. Each piece, and the design painted and engraved upon it, must be completely free from defect before he signs, wraps, packs, and ships it. Himself. His work is exquisite. We’ve been friends for over 20 years, and he lives 3 1/2 miles from here, and the only time I’ve seen him in the last 6 months has been in his booth at an art fair.

From a financial perspective, clearly I’m going about this all wrong, but it just sort of hit me last night that finally, after a lot of years adrift (thank you very much web content for search engine optimization) my life has finally aligned itself with true north on my heart’s compass. Life is not perfect, but all the important pieces are engaged and the sun still shines in the daytime.

For the bear, if he reads this, I think your way is successful too. You make a good tortured artistic soul in thrall of his cruel and lovely mistress and I hope you don’t take this the wrong way. You are a funny, grumpy, lovable old bear with whom I have not hung out in a long time. Text me.