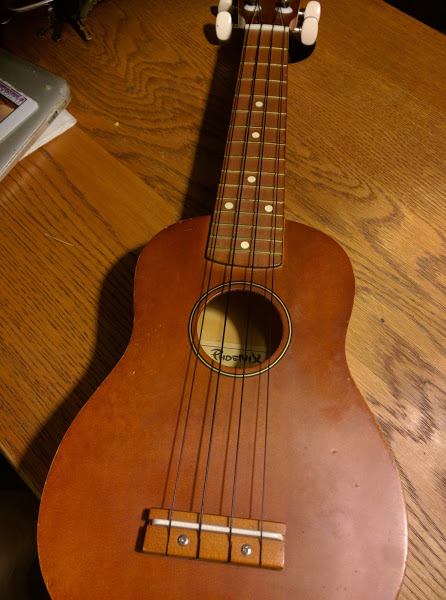 She ain’t pretty. But she is cheap. And easy.

Settling on a gratitude came with difficultly tonight; I seem to exist in a state of muted rage lately. That makes it hard to count your blessings. I’m either working or avoiding work at all times, and the number 1 way I’ve been avoiding work lately is this ukulele. Why is that slowly picking out “Stairway to Heaven” 40 times in a row feels easier than accomplishing the tasks I need to do, I want to do, other people are depending up me to do?  Tasks I’m actually capable of successfully completely, unlike ever being able to play “Stairway” at tempo.

That’s just this week. Usually I don’t use it as a distraction, but more as a calmative. I had developed a bad habit of staring at the screen late at night, and the ukulele gives me something I can focus on in the dark (much like with touch typing, I realized the only way to learn to do it without looking was to make it impossible to look), allowing me to pull back from electricity and possibly sooth my psychotic circadian rhythms.

I’m grateful for the uke, and the ability to play music. I always, always wanted to play, but I hated the music I was supposed to learn for the piano, so I hated practicing, so I never got better. And my hands are too little and intractable for the guitar. And certain things I can only learn on my own, with my own hands. I pity the people who tried to teach young dragon about music. 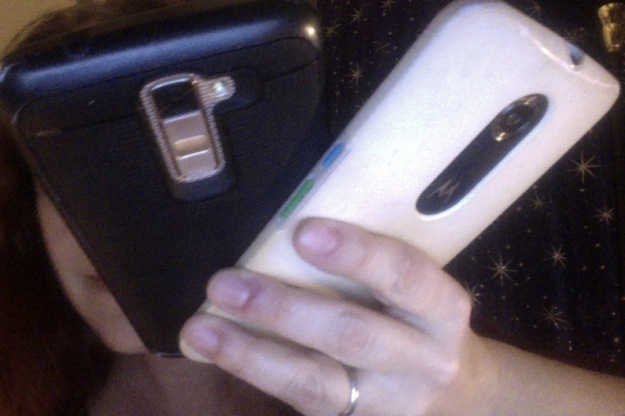 I wanted pictures of a fluffy elephant toy and I didn’t want to pay for it, so I went to Toys R Us and photographed a fluffy elephant there. The Canon Rebel was in my bag but just as I found the store it occurred to me that it would be equally effective, for my purpose, and much less conspicuous to use a camera phone instead of a massive DSLR.

The black phone on the left is one of the crappiest phones you can buy. The keyboard sucks, the GPS sucks, the voice recognition sucks, and also the rear-facing camera is broken, so it only takes selfies. The white phone on the right is superior in every way, but it has a cracked screen and that bothers me more than all the  other things, I guess. But I carry it sometimes for various purposes. No one noticed me taking 30 photos of 1 plushie from 30 different angles, and now I can do some more work on my big project.

After a crash photography shoot and some bare bones work in the library, I went to Ms. Kitty’s house, and she told me about “2 Phones” for Kevin Gates. In this masterpiece of self-aware modern music, the upcoming entrepreneur must carry 2 phones, one with which to communicate with his lover, and the other to conduct his business. I told her that I used one for Pokemon and the other to play words with friends. And then later, while I watching the video, Miss Kitty came in and told me about the Pokemon Go remix. Which makes sense.

Anyway, whenever I think of all the things I haven’t got…it’s important to remember how much I have. I’ve got 2 phones. But what I’m most grateful for is the work I did with that phone. It really is a true privilege to get paid to create things. 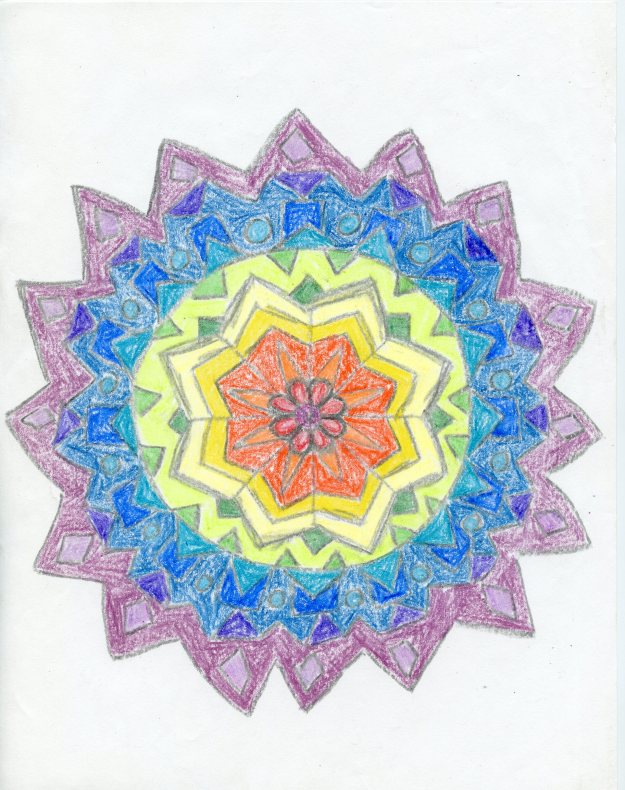 As good a place as any to pause and reflect.

About 6 or 7 years ago, long before QWERTYvsDvorak, I started this 100 mandala project and when I got to 100, I wasn’t ready to stop. Why not 1000 mandalas, I wondered? Because, as it turns out, 1000 is a LOT of mandalas. Ultimately, I drew about 130 of them, not counting a few drawn after the blog started, and this is the very last last one of the original set. It felt like I had come full circle from the first (also rainbow) mandala and perhaps going on would mean just repeating myself.

I’m not saying I’ll never draw another mandala again, but they won’t be my regular Monday feature/safety net when I forget the weekend is ending.

Ms. Kitty suggested that I replace it with some sort of Monday gratitude, which seems like a really good idea right about now. Must think of how best to execute within the framework of QvD re: art.

But speaking of gratitude and art: that Lady Gaga concert sure was something, wasn’t it? So many people were watching it that the roads were completely empty, as were all the best hiking trails. But I caught it later on the NFL Twitter page. Those NFL people really put on a good show. I seem to recall they hosted one last year for Beyoncé that just slayed. 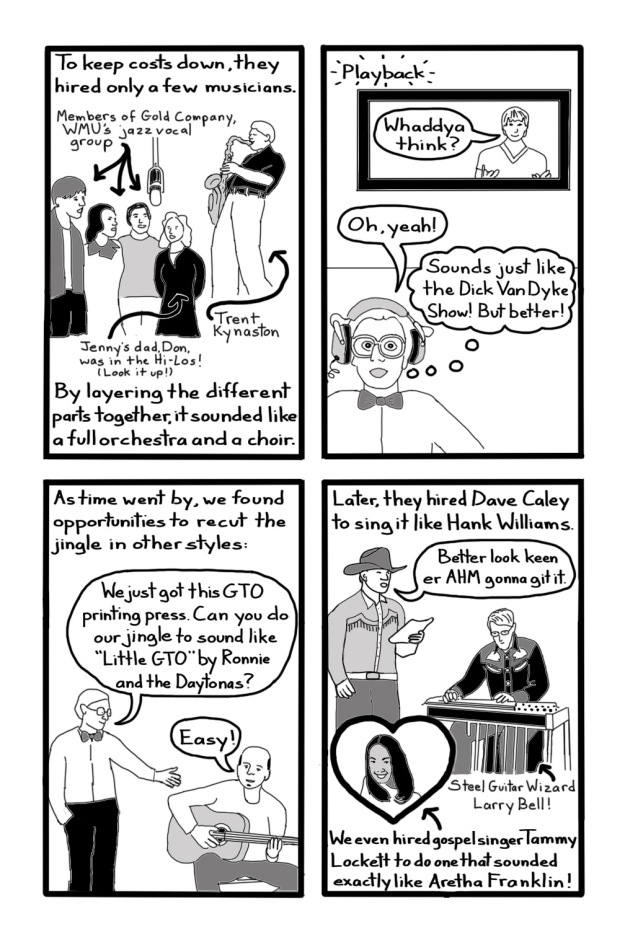 This is probably the most people who are actually supposed to look like real people that I’ve ever drawn into 1 comic.

Page 2 of “The Hills Are Alive with the Sound of Printing.” Took a little extra time as I wasn’t 100% sure of what the client wanted in panels 1 and 3, partly because creative people in fits of inspiration tend to have atrocious handwriting, and partly because (as only realized much later) I only read 1/2 of the notes. Also, the panels got cluttered pretty quickly, so I had to figure out which graphic elements to ditch (mostly people’s feet; originally there were a number of cowboys boots in this comic). I also had to leave off the speaker on the sound booth in panel 2 because the sound booth is already tiny and I couldn’t make it look good. Just imagine that the technician’s voice is coming through a speaker. Still, after it seemed done and uploaded, I decided to go back and add some fringe on the singer’s shirt in panel 4. It didn’t seem flashy enough for cowboy couture.

I’m especially pleased with the little pop-out heart for the gospel singer. It was a perfect compromise when it became apparent that a box would take up too much space.

I learned several things in the course of drawing this comic. The first thing was what a steel guitar is. Apparently whatever I thought a steel guitar is was wrong, but luckily, I had The Man around to set me right. The second thing was that The Man knows way too much about music. I had to look up “Little GTO,” but when I asked him if he knew the song, he could just start singing it. That song is like 50 years old; it came out 10 years before he was born. Then he gave me a short lecture about GTOs. Because he also knows way too much about cars. Of course, I did look up the Hi-Lo’s and WMU’s Gold Company. This comic will be distributed in Portage, so its intended readers will already know that WMU is Kalamazoo’s Western Michigan University, where I earned my MFA, but did not hear of the Gold Company. 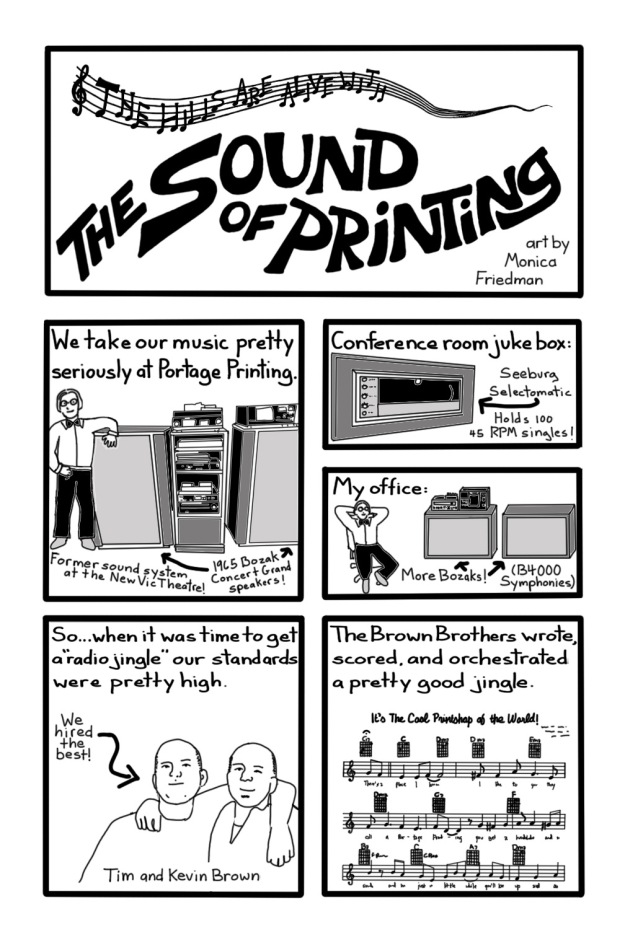 Here’s something new: working for money. The printer who made my Bonnie Jo Campbell comics, Craig Vestal of Portage Printing, hired me to draw a promotional comic for his shop. He wrote the script and drew the thumbnails. This is the first page I’ve created from his notes.

I had just read a Smithsonian article about Wes Wilson, the designer who created the psychedelic-style concert posters in the 60s, and decided to draw the title in the same style as the original Sound of Music movie promotions, which has that groovy ’60s feel even though the movie is set during WWII. Craig sent me photos of all his classic stereo equipment and of the Brown Brothers.

This is page 1 of 3. I don’t know what number comic this is, but apparently Craig has hired a number of artists to create a quantity of comics detailing the history of his shop. Clever. Comics are the best. I’m going to start the bidding at $5 per foot away from you you want us to move.

Wasn’t going to draw a comic tonight, but this just fell out of the Wacom tablet. I’m still not exactly at performance level on the ukulele, although I enjoy playing it and have 5 songs memorized. The Man plays all the brass instruments, and has for decades. He plays the sousaphone in a klezmer band. He’s not the least bit Jewish, but with that beard, wearing the right hat, he’s the most Jewish-looking guy in the group. He’s also played trombone and euphonium in the band, but he really wanted a tuba, and he picked the sousaphone up on the cheap, on account of it being crushed, tarnished, and in multiple pieces when he got it. And he fixed it up and put it back together himself, which is pretty cool.

Obviously, ukuleles are ridiculous through and through. That’s what makes them so wonderful. Baby, you’re much too sweet.

Prince’s death didn’t hit me the way Bowie’s death did, even though I would say I enjoyed the work of both artists about equally. The different, I guess, was that my enjoyment of Prince was more public. Prince covered the airwaves in the ’80s. Everyone was always singing “When Doves Cry” on the playground. Prince felt pop, even though in retrospect I’d say his music had great depth. My experience of Bowie was more private. Labyrinth was a movie about inner worlds that spoke to me internally; The Rise and Fall of Ziggy Stardust and the Spiders from Mars was an intensely personal experience.

But that’s what I drew a David Bowie tribute comic, and all I have for Prince is this pun.

An ex of mine always said that if I were a car, I’d a little red Corvette. Later on, he thought I was just going to hold him back, but in the end he realized he’d made a mistake. It was too late, then, anyway. I guess I was too fast for him after all.

Managed to get some writing in and put together part of a complicated comic with ridiculously complex artwork and too much text that nobody is going to appreciate, and that in a weekend with 2 parties. Starting to feel more hopeful, more full of creative energy, and more focused.