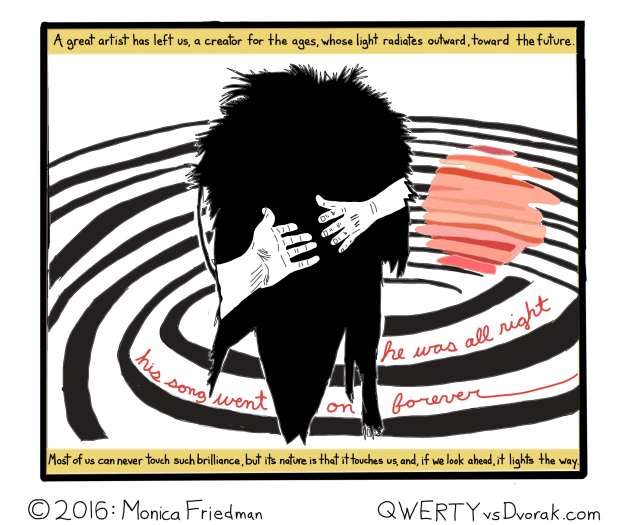 I’m not that deep. I’ll never be that deep. But I can see into the depths.

I don’t usually do stuff like this, not being one for idols, but David Bowie was such an phenomenal creative spirit that it’s hard to imagine the hearing, seeing human being who wouldn’t be inspired by his work. He was a true artist in every sense of the word, a man who wrote what still stands, in my mind, as one of the greatest commentaries ever created on love, aliens, and rock and roll (let alone one of the greatest albums of all time) when he was 24 year old, and then, rather of resting on his laurels, invented himself again and again, for every album, for every movie role.

The Rise and Fall of Ziggy Stardust and the Spiders from Mars played in the background as I drew this comic, and while I’ve listened to this album start to finish literally hundreds of times in my life, I kept hearing new ideas, new notes. It kept offering new inspiration.

I can’t even talk about “Lazarus” right now.

If you notice that I have chosen the silhouette of Jareth, the Goblin King to represent the dozens of faces that Bowie wore in his career, it is because I am 9 years old, and because when we fall in love, we always remember the moment, but that doesn’t mean I didn’t love The Hunger or The Man Who Fell to Earth, brutal and adult as both those films were.

This is sort of what I feel about any really great artist finishing their work here: it’s sad they had to go when they did, but it’s wonderful that they got to stay as long as they could. The world is a better place for the existence of people like David Bowie and Robin Williams, and I’m a better artist for having walked in their light.

2 thoughts on “His Song Went on Forever”