This is just a little card/polymer clay combo I put together for The Man’s birthday. He will always be The Man and he will always need a little sunshine.

This blog is on fire. And it’s lit.

This piece was pretty straight forward. I used a protractor, a ruler, and a folded piece of construction paper to get the shape of the red bottom layer perfect. Then I used that layer as a guide to get the middle orange and top yellow layers to match up, and cut the random little sparks that I added on top for more depth. For the lettering, I drew freehand and then cut all the layers at the same time. I doubled up the paper for the letter that repeated, meaning that the letter E involved cutting 12 sheets at the same time. One of the Hs is upside down and the centering is a bit off but otherwise the lettering is my favorite part. The image took 4 hours and the lettering took 3.

Tomorrow I’ll go back with the rubber cement and the stapler and make sure everything’s tacked down. Although this board will probably only be up a month before I do the summer one, it’s a little known fact that rubber cement becomes increasingly less adhesive the closer you get to 100°. And it’s getting close to 100° around here.

We used to have a concept book about color when we were kids, one with transparent pages that stacked up to reveal different colored animals. There were a bunch of creatures, all in different colors; the ones you saw depended on which pages you looked at and also which direction you looked. That always fascinated me. So that’s a basic visual gag.

Anyway, It’s been a couple weeks since I’ve drawn a comic but it was fun to get back. 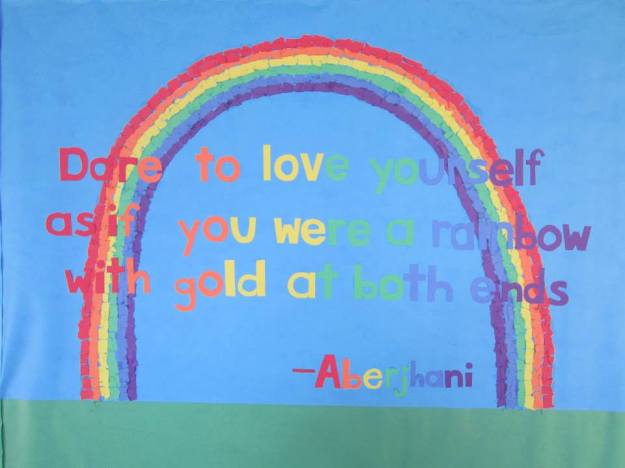 Spring 2014, Here again I had the idea for the design first and then found an appropriate quote later

It’s important to photograph these images as soon as they’re posted. The colors do fade very quickly, and every once in a while, the kids deface things. This one not only got sun-bleached in a week or two, but also got scribbled on by someone who clearly was too young to hold a magic marker. It’s still very beautiful to me. These letters were all cut out freehand.

Spring 2012, the teachers really seem to like the poetry boards

More freehand letters, plus I cut every one of those leaves out by hand. Sort of wish I had planned the layout a little better, but it’s still fairly striking.

And here is my last bulletin board of the 2013-2014 school year. Anyone who lives in southern Arizona has seen the sky like this: during the monsoon, if it rains in the afternoon, sometimes it clearly slightly afterward. The clouds are all lined up like this, with sun tumbling through the breaks and spilling down over the mountains, which glow gold, red, and purple, depending on the time of day. 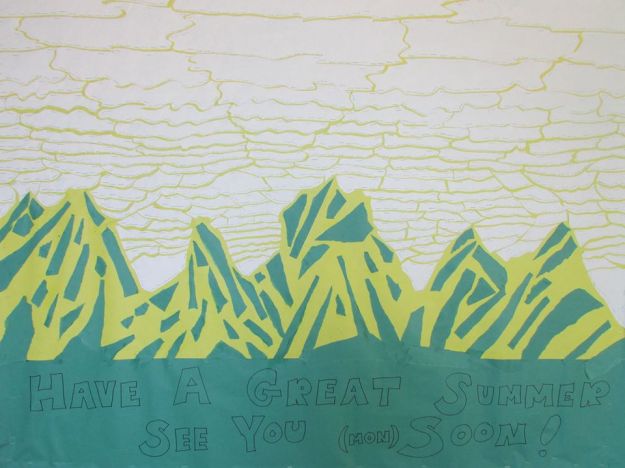 This sampling of a dozen images represents most of my favorite, and maybe about half of the designs I’ve done since 2009, when I first started. Looking back, it’s not an insubstantial body of work!