You can’t buy happiness. But you could buy a T-shirt from my RedBubble shop, which would definitely make me happy, and probably make you happy.

This is Allison. Allison is a successful writer and professional performer of death defying feats. Allison is very happy. Why do you think Allison is so happy? Is it because she is wearing this kickass QWERTYvsDvorak T-shirt? Correlation may not prove causality, but there does seem to be abundant evidence that wearing a QvD T-shirt can make you, and the people around you, at least 20% happier.

Allison is modeling “Embrace Me to the End.” If you click the link, you could, too.

This has always been one of my favorite designs in the shop, even though a marine biologist once chastised me for drawing a blue whale, rather than a sperm whale, which is more commonly thought of as the giant squid’s natural enemy. The way I see it, we don’t know everything that goes on under the ocean. Who’s to say that there isn’t a kraken sized squid that periodically tries to munch on the largest animal on the planet at the deepest, darkest depths of the world? I like both cephalopods and cetaceans. The bigger the creature, the more love there is to go around.

There are also some other interesting things in my shop if you click around.

I procrastinated and didn’t draw a comic and there’s still one other important thing to do before bed tonight. It’s sort of related to the fact that 3 years ago, The Man and I got legally married by the law of the land. We’d already been together for 4 1/2 years before that, and we were, as we said, “gay married” for a couple of years before the wedding, Tucson being a city that offers domestic partnerships, and the University of Arizona being an employer that offers benefits for domestic partners. I wonder if the marriage supersedes the partnership?

If you’ve ever watched a nature documentary narrated by David Attenborough, you might have noticed a certain exuberant satisfaction to his voice whenever he describes the eating of one unwilling organism by another faster or stronger or more clever organism. “Take that, life” his intonation seems to say. “You have been consumed by one more powerful and more deserving than you, and in any case, ha! There is a finality to all things, and yours has come. Now let us celebrate the continuation of life through the destruction of life, admiring the rightness of the situation.” Or maybe I read too much into his tone. 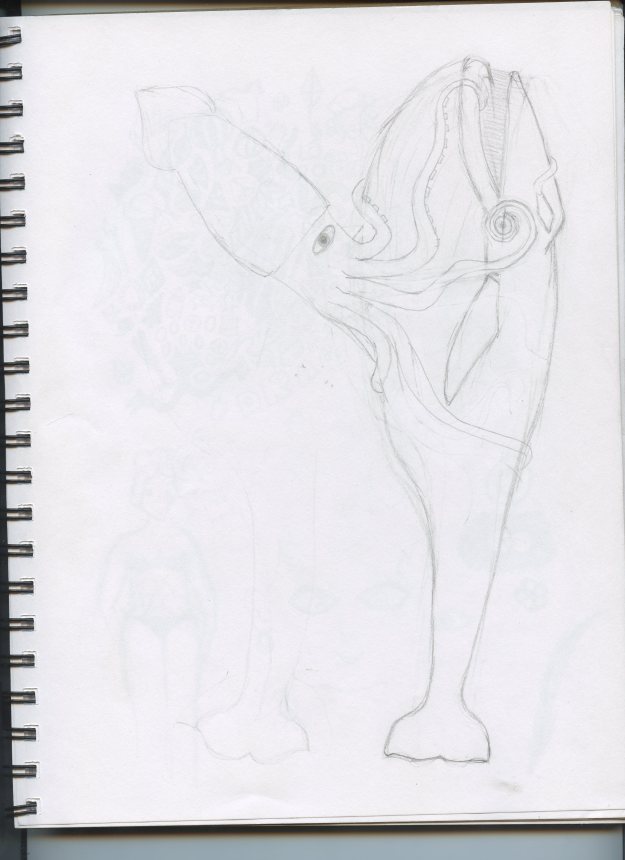 Anyway, like many nerd girls, I vastly admire cephalopods in all their forms, and like anyone with a spark of imagination, I cannot help but sit in awe of any sort of megafauna: giant squids, of course, and just as naturally, the world’s largest animal, the blue whale, who is really a remarkable creature. This is probably the fastest and easiest finished design in my Red Bubble store. The sketch itself was done after looking at a few photographs, and the digital design required no augmentation. It’s a bit threadbare in one sense, but I love the way the colors pop on a black background.

A T-shirt for people who enjoy hugging.

You can get this T-shirt in a variety of colors and styles, but I do think the black backgrund works best. If you’re going to go for this kind of dubious humor, you might as well make it stand out. It is also kind of cute as a tote bag or a sticker.

Wear your heart on your shoulder.