The only thing I can really competently sew is a curtain. I’m envious of those people who whip out renaissance dresses and elf coats and doll clothes and leather bags. It seems impossible to me. When I try to make a quilt, I start out with the best intentions and perfect squares but soon enough my lines are diagonal and nothing lies flat. 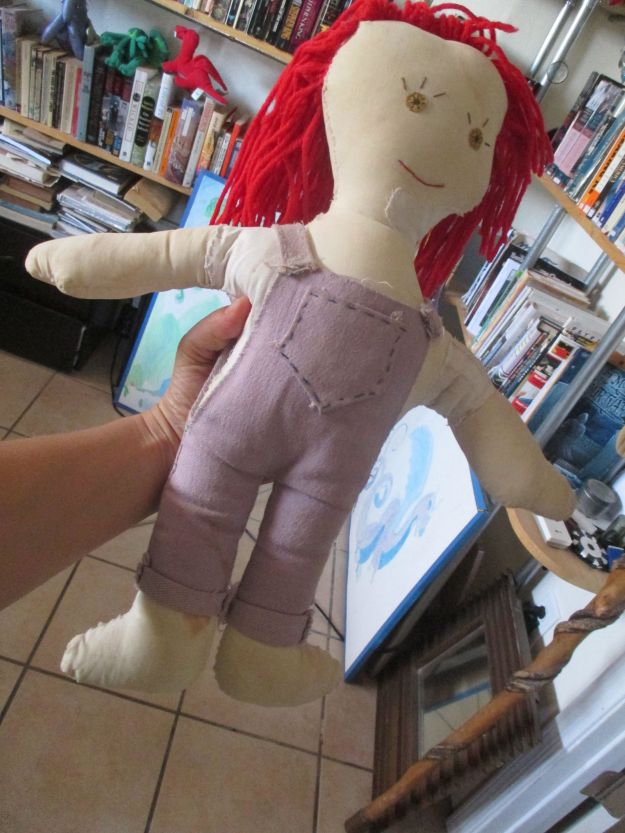 The Monica Doll, slightly worse for the wear. I still have the human-sized overalls my mother made for me from that purple denim.

This is a ragdoll I made for a guy I dated in college, so he could take me with him on a semester abroad in Japan. He gave me a hand made bracelet of copper mail. Both the doll and the bracelet were imperfect creations and kept breaking (links falling off the jewelry, seams bursting on the doll), and we had to keep asking each other to fix them. When we broke up, almost 20 years ago, he kept the doll and I kept the bracelet. They were both broken, like our relationship, and neither one of us wanted to invest the energy to fix the tokens when there was nothing left to fix them for.

About a year ago the guy contacted me on Facebook and asked if I wanted the doll back. I was frankly amazed that he’d had it all this time. I had assumed he’d set it on fire, like he probably did with all the photo negatives I tried to get back from him, or, at the very least, voodooed me up. But the doll was in about the same condition. Rather then fixing the seams, which would just burst again, I lay in some good patches on her so she’s a bit sturdier than she was before, if not somewhat worse for wear, just like me.

This is a simple project I did with my stepdaughter, who insists she’s really good at sewing, but really isn’t. You just wrap some yarn around your hand or a card so you have some big loops. Using a small piece of yarn, tie off the head. Then cut and tie off the arms. Tie off the waist. Separate, cut, and tie off the legs. You can dress your dolly or give her hair, but I couldn’t find anything that looked better than naked for her.