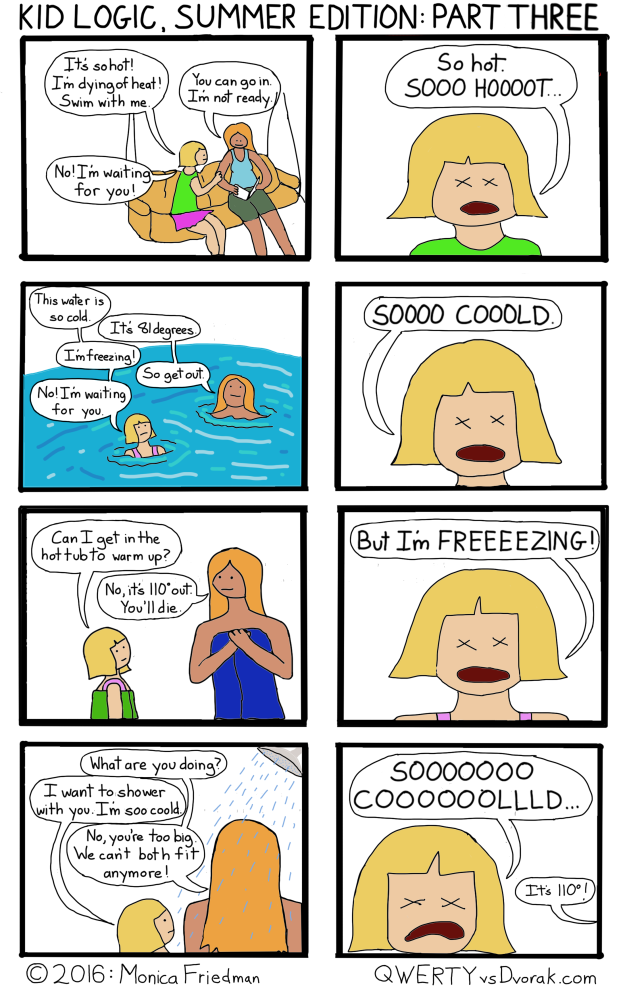 In the next panel, the kid puts on winter pajamas, wraps herself in a quilt, and goes to sit in the stuffiest room in the house, and we’re back to the situation in Wednesday’s comic. It’s a vicious cycle.

Whew! Better late than never. Part III in the continuing saga of children in the summertime. The temperature actually dropped almost 20 degrees since I had the idea for this comic, and it’s only in the 90s, but it’s getting humid. Soon the monsoon rains will come.

I wanted to draw and post this comic last night but it was really kind of a delirious day and I didn’t get to the computer until after 11, at which point I couldn’t focus on drawing, so I put it off and put it off. I wanted to have it up by 2 pm today, at least, but then the Fox wanted to buy us chicken and waffles and then go swimming and hang out and The Man wanted to talk and my parents called, la la la.  I’m supposed to be at the Misseses Kitty’s house in 4 minutes, which obviously isn’t happening either.

There are highs and lows, but ultimately, I have to admit that my life is pretty blessed. In terms of privilege, I’m probably in at least the top 10%. Things are going to be OK.