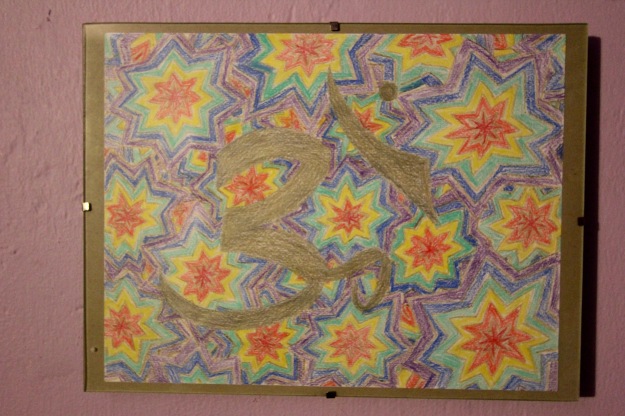 Despite my brother sending me an email explaining how he’d threatened my nephew with last Thursday’s “So Superior” comic, saying that if the bookish 10-year-old didn’t participate in physical activity he too would end up a basement-dwelling neckbeard troglodyte, I don’t seem to be feeling the comic today. If my nephew does end up living in my brother’s basement, I expect that will be entirely on his parents’ shoulders, right? I can rest assured that neither of the Kids will end up living in my basement, because the ground in Tucson is mostly clay, which is difficult and expensive to dig, so hardly anyone has a basement.

Anyway, I remembered there was another old crayon mandala that never made it to the website, because it’s hanging on the wall in the spare bedroom/closet. I wanted to lay it on the flatbed scanner but it appeared to be attached to the nail in some complicated way and it seemed safer to just let it stay where it was.

Truth be told, I’m getting a little nervous about finishing my big project on time, and around about while you are reading this, I am actually getting an MRI of my dominant hand, which could potentially result in surgery, which would likely prevent me from drawing anything or typing more than 20 words a minute for quite some time.

Anyway, I have to go draw some elephants.