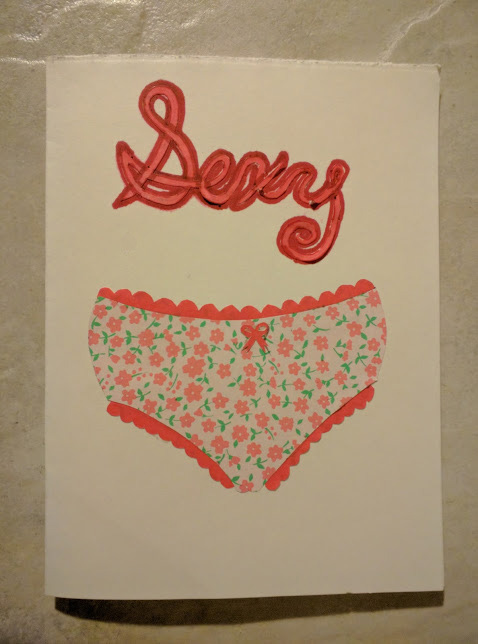 With a little touch up in Photoshop, this could be a RedBubble design.

This is a card I made for a friend’s lingerie-themed bridal shower. The dark red edging around the letters is Sharpie and the rest of the design is cut origami paper, some leftovers from my 1000 paper cranes project. The word “sexy” is also cut paper. It was almost one contiguous piece but I ripped it the tiniest bit while cutting it out, and then ripped it again trying to fix it.

I’ve been mostly working on another project while obsessing over the future of humanity. Part of me felt defeated by reality and overwhelmed with helpless terror, but then I read this New York Times article and thought about what Rabbit keeps reminding me about samizdat and it’s like—yeah, one tiny voice against a hurricane, but also, a million tiny voices against a hurricane. Some people think Trump wanted Bannon off the security council because he resented the media’s implication that Bannon was pulling the strings. I drew this comic after being tagged in a Facebook status that suggested cartoonists portraying Bannon as a puppetmaster could help limit his influence by appealing to Trump’s grandiose sense of being the most (only?) important person in the world.

I’ll draw webcomics again, I guess, but 4-5 a week isn’t going to happen at least until I finish the other project. In case you’re wondering, it’s called “Close Encounters of the ∞ Kind.” I didn’t name it; it’s a collaboration. I should probably talk about about it later.