“Gorilla Girl,” raw with emotion and rich with meaning, offers a protagonist who may consider herself a member of the animal kingdom, but is a great deal more self-aware than a lot of Bonnie Jo Campbell’s characters. She knows, at least, who she is and what she wants to do, and she recognizes opportunities when they arise and seizes upon them.

I’ve read this story many times in the last 15 years and I can’t believe that only as I found myself stuck on how to present the scenes at the circus did I see the parallels to Steppenwolf by Hermann Hesse, a book that had a profound influence on me as a young adult. Of course, Harry Haller, as a young man, has voluntary ties to his middle class upbringing and is torn between his 2 natures. Our Gorilla Girl, young and without male privilege, is moderately tied to convention by love of her mother but primarily by the lack of mobility and freedom offered to young girls. Her crisis may be less pronounced due to her temporal environment, but more pronounced due to her gender. Her struggle is not whether to give the beast reign or to settle down in a comfortable bourgeoisie existence, but only when and where to give the beast reign.

My first thought in tackling this story was to highlight my immediate reaction that it should be read as a universal tale of female rage, that all Americans socialized female contain within themselves this exact anger, the despair at being restricted by virtue of gender, the sense of alienation by an oppressive civilization that imposes a dull domesticity on a vibrant animal nature, but then I’m not sure if that’s me projecting. Clearly, not all women bristle against the edict to be beautiful and well-groomed and mannerly and acceptable/approachable. Some of them seem happy to become the thing my mother so desperately wanted for me, the thing that neither I nor the protagonist could hope to emulate, let alone assimilate. After Jill from “Boar Taint,” Gorilla Girl is the Bonnie Jo Campbell character with whom I most relate, although I have found other—ahem—outlets for my animal nature and made a truce with objective reality. I leave it to the reader to choose: is Gorilla Girl an anomaly, a freak who can only thrive in the carnival, or is she ubiquitous, an expression that all women carry with varying degrees of comfort and ease? 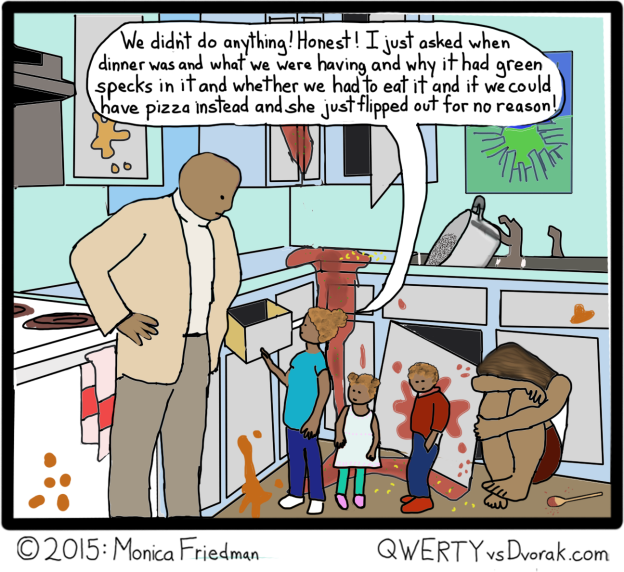 Dad thought he had the situation under control until 9:30 pm, when someone remembered that they had to build a scale model of the Great Wall of China out of sugar cubes before second period tomorrow.

If you’re like me, the question, “What’s for dinner?” fills you with terror and rage. It’s not that I mind sharing descriptions of my culinary genius with my family; it’s that this question is actually a prelude to prejudgment. Since I already know what the kids like and what they don’t, I’m well aware which dishes will be greeted with cheers and which are likely to result in disgusted faces and half-hearted whining. And I don’t care. I don’t care about your weird macaroni fetish or the fact that there is only one texture of food that you find palatable, which is mushy. There are more than 6 foodstuffs available for human consumption. The ability to eat countless dishes, comprised of many different ingredients and many different flavors and textures is one of the great benefits of being an omnivore and grownups who enjoy good food shouldn’t be held hostage to an undeveloped palate.

So, really, “What’s for dinner?” is a dangerous thing to say to someone who’s spent an hour in the kitchen.

Of course, when you’re a kid, it’s wholly innocent. It’s only 30 years later that I understand why my mother would get so bent out of shape about it.

Sigh…optimistically, I’d like to believe that writing a sizable number of comics (let’s say 100, in which case we are 25% of the way there) should help develop my cartooning skills to a somewhat higher level. And yes, they are improving, but realistically, I think I need some more formalized instruction, if only through some kind of web module.

What I’m saying is that Dragon jumping up on down on the snake’s corpse is not quite right. There’s something missing from my depiction, both in terms of accurately portraying the act of jumping up and down in a recognizable form, as well as in terms of the comedic value that such a drawing should communicate to the reader. However, The Man asks a perfectly cromulent question. How long has Dragon been sitting inside that magical cave, drawing? Also, the expression on The Man’s face, and the way he’s desperately trying not to look, maybe are kind of funny.

In panel 3, the way the snake is lolling on its back, it’s sort of asking for a beatdown.

Originally, I sketched this one out with Dragon talking to Dragon’s reflection in the mirror, but ultimately, the backgrounds seem to make this one for me.

The last couple weeks have been leading up to this moment, and there will be more fallout down the line. At heart what this is really about (and many readers probably understand this in their hearts) is the tendency of some people to devalue their own outrage. The belief that we do not have the right to be angry is a pervasive one, particular among women, and often this legitimate anger is funneled through some other channel. You may have heard the expression, “Depression is anger turned inward.”

Dragon is embracing the anger and saying that it’s OK to be angry.

Besides that, I’m rather pleased with the typewriter in panel 4. This follows the discussion of funny weapons. The Man still thinks typewriters are inherently humorous. Plus, using the typewriter offered the opportunity for a punny punchline. The snake doesn’t need to get the last word in, and the sentiment, “words hurt!” is a lot more powerful when accompanied by a projectile weapon that is used, generally, for the purpose of forming words. Anyway, Dragon throws a typewriter would be a good name for a punk band.

Bonus news: RedBubble is offering a site-wide 15% off coupon code for T-shirts. There’s never been a better time to purchase a Dragon shirt, or other fine QWERTYvsDvorak designs. Just check out our web shop and use coupon code RBTEES15 any time before midnight Tuesday for great savings.

The Man is the one with the real vendetta against the Kindles; they’re a convenient focus for Dragon’s rage.

This was a fun one to draw. I’m particularly enamored of the Godzilla stuff going on in panel 3, and I was pleased to figure out how to draw the second panel without using a source image or looking at myself in the mirror. My only sorrow is the SFX words in panel 4, which are OK, but didn’t seem quite right.

In case anyone gets the wrong idea, I never take my aggression out on the children. That stuff is reserved for The Man. Don’t worry; he can take it. But the thing is, when dragons get angry, you don’t want to get in their way. Fortunately for the world, Dragons are slow to true anger. 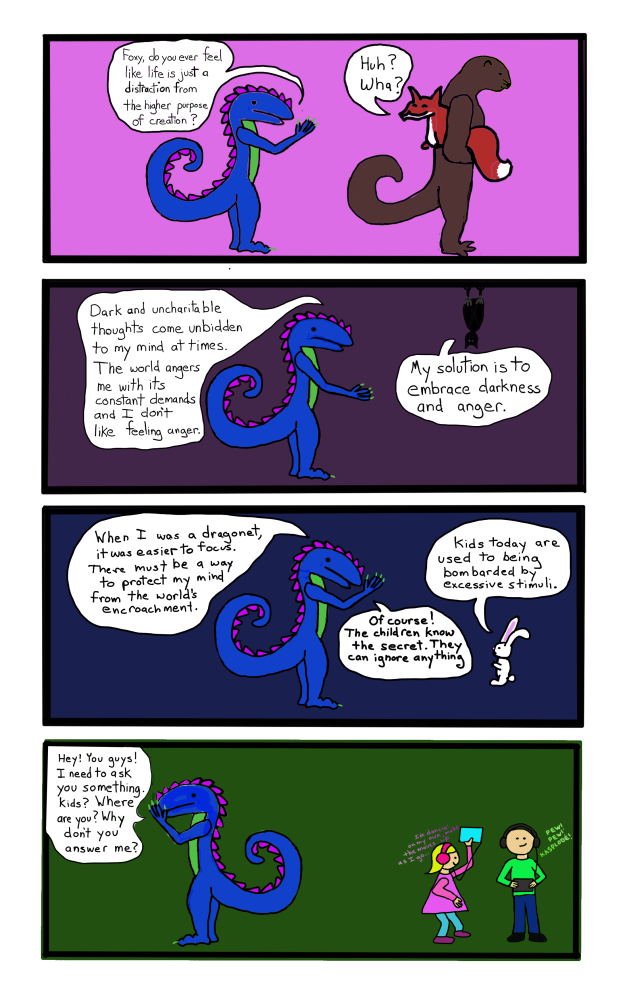 Remember when you were a kid and your could ignore anything?

Vampire Bat fits into the scope of this comic, I think, and creates a nice contrast to some of the other characters. I could probably draw a better bat, but I’ve been sick and frankly I don’t even really remember drawing most of this comic, which I apparently did in the middle of the night with a mild fever while watching 3 episodes of The X-Files on Netflix, which I also don’t remember. Thank you subconscious mind. Way to be way more functional than my conscious mind, even if you do keep it all to yourself.

In panel 4, the girl is, of course, rocking out to Taylor Swift. They really do like those big headphones, which are a lot more comfortable than earbuds. As adults, it’s sometimes hard to know how to handle kids and technology. We don’t want them on their devices all the time, but we also don’t want them constantly complaining that they’re bored. We don’t like hearing the random sounds their devices make, but we also don’t like them being completely checked out and unable to hear anything you say to them because they’ve got the headphones on.