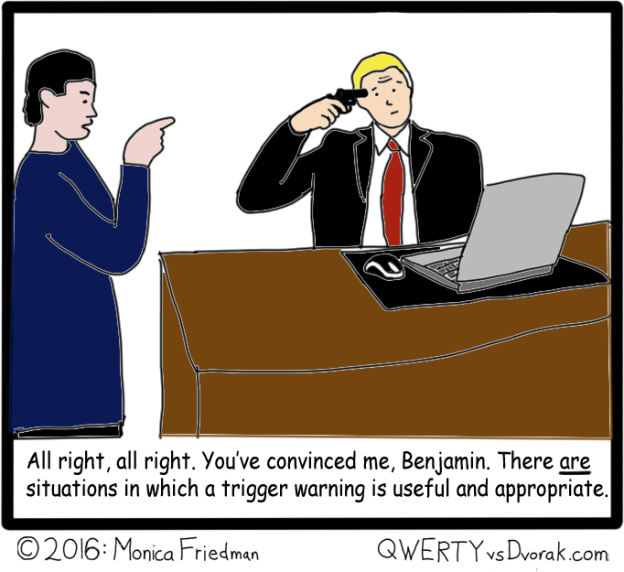 I considered going dark: that is to say, getting the heck off the internet, or at least not posting anything so no one could see that I was on the internet. But instead, I’ve gone dark: in the sense of my hero, Gahan Wilson. The world is a scary place. In my human interactions, I strive to remain a beacon of beauty and love. But art…

In the wake of this cataclysmic election, I found myself added to a number of secret Facebook groups; if you have ever been involved in any sort of progressive activism, you probably know what I mean. People trying to support each other through a crushing blow, people preparing to mobilize for an assault on civil rights, people just trying to understand the world. In one of these groups, someone mentioned that the next 4 years is going to see the production of a lot of powerful art. Art is always more powerful when it’s motivated by something beyond beauty and love, although most people prefer not to confront that type of work until it’s absolutely necessary. Myself included. I try to stay light.

But there is darkness in the world. I know so many people right now suffocating under the pressure of the unknown. I know too many queer and trans people terrified about what their status will be in the near future, whether their gender markers will be honored, whether their marriages will still be legal. I’ve heard too many stories of children being bullied in schools, told that they’re not really Americans because they’re the wrong color, taunted about being deported. I know too many women frantic about the possibility of losing their reproductive rights, and who knows what other rights. And I know too many heterosexual white men who feel helpless at atrocities being committed in their names, against the people they love, in defense of values they can’t support.

So, for all my friends, I say: don’t hold that darkness in. It only consumes you from the inside. Don’t be afraid to be afraid. Don’t hide. Put it all in the light: fear, anger, sorrow. Whatever you have eating you, it doesn’t have to fester. You might think that it’s unfair to release your darkness in the world, to burden others with what scares you most, but what you find, when you do, is that you’re not alone, and that what vanquishes darkness is light.

It’s been a rough day. So what? Actually, I’d rather forget about the diagnoses I already have.

It’s late; I’m tired. Also, I have depression and chronic pain. And insomnia. But not, I’ve been reassured, early onset Alzheimer’s, although my grandmother and 2 of my aunts both died from it, so it could still happen. Until then, the only option is to soldier through the cyclical feeling that I’m down 2 or 3 standard deviations on the bell curve, intelligence-wise. Then I just remind myself of this classic scene from The Simpsons. Losing my perspicacity, indeed.

There would have been more to this blog post but it’s late, I’m tired, and I have depression, chronic pain, and insomnia. Oh! Here’s a good one; I also forgot to eat dinner. All in all, things have not been optimal. 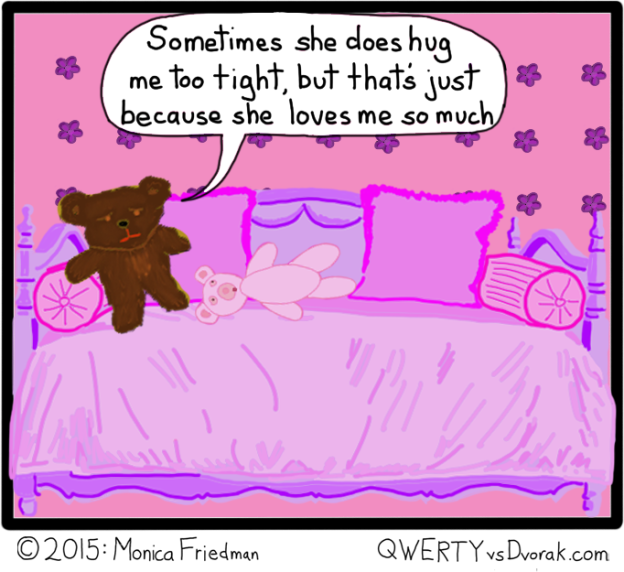 Eddy when he said he didn’t like his teddy…

When we were in grad school, the Rabbit used to draw little comics, which she sometimes stuck on my office door. I still, somewhere, have a rather dark one (which probably in part inspired this comic) with a little teddy bear and a big teddy bear, and the big teddy has spaced out eyes and a bottle in his hand, and the little teddy has a worried expression on his face, and the caption says, “Daddy, why do you drink?” This probably tells you more about the Rabbit than my comics do. She also had a surreal one about Sylvia Plath, except Plath was represented as a roast turkey. If this doesn’t make any sense to you, you probably don’t have an English degree. But trust me, it’s darkly humorous.

I fell into a click hole the other day at a website called getoffmyinternets.net (GOMI), which is basically a platform for a sarcastic blogger to make fun of other bloggers. The author chooses her targets–they’re exclusively the sort of  entitled popular attention-seekers who post dozens of pictures of themselves and their fabulous lifestyles we secretly want to watch fail–and takes a bitter joy in tearing them down, or, as often happens, watching from the sidelines as they self-destruct. She’s talking about people with thousands of followers, with monetized sites, with book deals, so it’s not as if she’s hurting anyone. These people will sink or swim regardless of her snarky opinion.

Still, after a dozen or so pages, I started to feel bad about myself for reading it. After all, if you think someone’s blog is overly precious, or ostentatious, or oozing with braggadocio, or petty, or stupid, or ugly, or pointless, or whatever, you can just not read it. Sure, it’s frustrating to see someone you deem utterly talentless succeeding on any level, particularly when you can’t reach that level yourself (I would know), it’s utterly unhealthy to focus on your distaste and make it the target of all your emotional expression (I would know).

Obviously, GOMI is successful because it’s mean, because it doesn’t pull punches, and because it lacks any sympathy for its victims. It doesn’t play safe.

You can like something even when you think it’s inappropriate. Weeks ago I read a scathing criticism of the fact that in Age of Ultron, Tony Stark makes a joke about prima nocta–that is: a rape joke. And yes joking about rape is horrible (although I would argue that this sort of thing results from the existence of the rape culture, rather than being responsible for its perpetuation) but to be totally honest, I laughed when I heard the joke in the theater last weekend. Hardly anyone else laughed, although I expect this was more because hardly anyone else got it, rather than because people were unamused by a casual historic reference to state-sanctioned rape.

The viewer knows that Tony Stark would never consider raping anyone, because he’s a billionaire philanthropist playboy genius and probably needs the Iron Man suit just to keep women from crushing him to death with their desire to get on him. And it’s totally the kind of unconsidered joke the character would make. (That was sort of the point of the movie, that Stark is a guy who is so intent on answering “Can we?” that he doesn’t consider “Should we?”) Sure, the movie would have been just as successful had he made no joke at all, or if he had instead joked about some other right of totalitarian dictators, but–screw it–I’m sorry, but that joke was funny to me, in context. It was dark and violent and inappropriate and it made me laugh at loud.

By and large, I’ve tried to keep my blog rated-G. My stepkids and my nephews read it sometimes, and other family members, and, I would imagine, my stepkids’ other family members. Occasionally I edge into PG territory. Anyone who actually knows me probably realizes what an accomplishment this is, because I myself am a basically R to NC-17 kind of person, despite the fact that I’m able to dial it back in the presence of children, the elderly, and the ethically prudish. So I drew this comic a while ago, and a big part of me wanted to run it because it amuses *me*, but at the same time, what it is is very dark, in its way. It’s different than what I’ve run in the last year. (Oh, wow, it’s been a year….)

Let me say this: I understand that domestic violence is NOT FUNNY. But a little girl’s relationship with her stuffed animals and primary love object can be very funny. Anyway, if you don’t like me, you’re free to get the hell off my Internets. The inside of my head is a weird place, and not everything can be compartmentalized all the time.