***Depending on how stodgy your place of employment is, this content is potentially not safe for work. It contains stylized representations of the nude female figure, and while it is not exactly rated-R, it might not be OK in certain situations. Please enjoy in an appropriate environment.***

Don’t scroll any farther if you are afraid of what you might see when I move my thumb.

A friend of mine likes to plan things. He likes to arrange them. He enjoyed complications. He had an idea for a party game, and he asked me if he could make a little piece to be used in the game. Originally, he was talking about a “token,” but as he discussed it with another friend who was helping him organize, the word “fetish” kept popping up. When I finally got added to the thread, I saw the word “fetish” and said, “Well, if that’s how it is, I’ll just recreate the Venus of Willendorf.”

Her shape is classical: her coloring? Not so much.

I was guided not only by this old representation of the female form, but also by some speculation (which I read in Jean M. Auel’s Earth’s Children books) as to how such icons might have been used. the way the legs are formed, the figure could be stuck into the ground to stand by itself, potentially guarding a space. In a spiritual sense, of course.

Side view: who needs arms when you’re shaped like this?

I had to mix my own color: gold, yellow, and white, with a touch of pink, but once I got the caucasian skin tone down, I liked the idea of using some modern colors for accents. The original Venus has no face, just ringlets of hair around the head. I decided to go with this sort of Princess Leia look for this girl’s hair, and if you’re going with purple hair, why not have hot pink nipples. My Venus is about half the size of the Venus of Willendorf. Part of the specs said that the fetish should be small enough to be concealed in the hand, so this thing is only about 2 inches.

She took about 2 hours to model. Per usual, I learned a lot by making her, and could probably do a better, faster job if I wanted to make another. 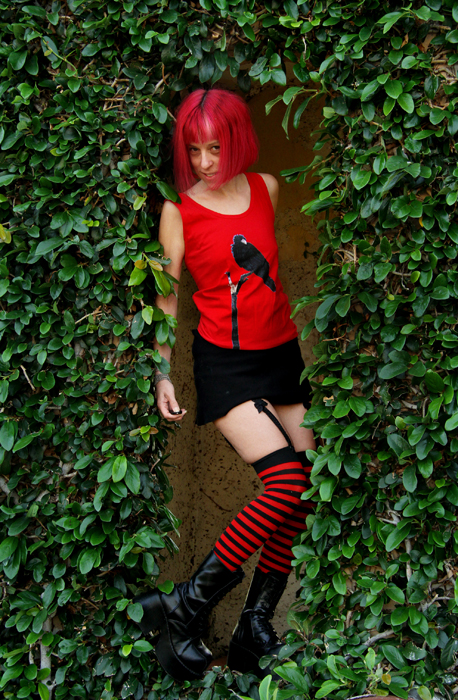 Raven: out of the forest, into the city. Photo courtesy of VioletPhotography

Direct from California, we have another iteration of Punk Rock Raven, pictured here on a red tank top modeled by the ever-lovely Violet.

One takeaway I’ve gotten from customers is that the sizing on some of the shirts is unexpected. Although the site shows a female model wearing the “unisex tank top” (pictured above), the sizes on that product are actually calculated for men. The “racerback tank,” however, does use women’s sizing: the chest measurement for a small racerback is 3 inches less than that of a small unisex tank. In any case, if you’re on RedBubble buying a T-shirt, and you’re trying to decide which size is correct for your body, there’s a tiny link beneath the size choices that says “sizing chart,” which explains how that particular style is cut. It’s different for the different types of shirts, so I would advise checking that out before you order. Then you can easily measure yourself/your favorite shirt, and choose accordingly.

Closer view of the bird. Every feel like giving someone the bird? Well, now you can. Photo courtesy of Violet Photography.

I noticed that this design wasn’t available on the coffee and travel mugs, so I reuploaded it to remedy that oversight. Now Punk Rock Raven can join you for breakfast or on the road.

Click this link to check out Punk Rock Raven products in the QvD shop!

One of the obstacles I must overcome as I learn to draw is that I personally lack almost any true form of depth perception. Most of my life, I’ve exhibited a condition known as strabismus exotropia; I am typically either seeing through my left eye or my right eye, but, as a general rule, not both eyes at the same time. Whereas most people receive stereo data from two points, which are combined by the brain into one three-dimensional picture, people with exotropia lack binocular vision and tend to perceive the world as being somewhat flat.

Although I wear rather extreme prism lenses for this condition, they only really work to a distance of a few feet, and then only rarely, when I’m well rested and looking intently at something in ideal lighting conditions. At the slightest hint of eye strain, one eye will bow out and let the other soldier on alone, only shouldering the burden when the other eye throws in the towel.

I get a lot of headaches.

More to the point, this means that I have to work extra hard to understand depth. Dimensionality takes a lot of extra effort. 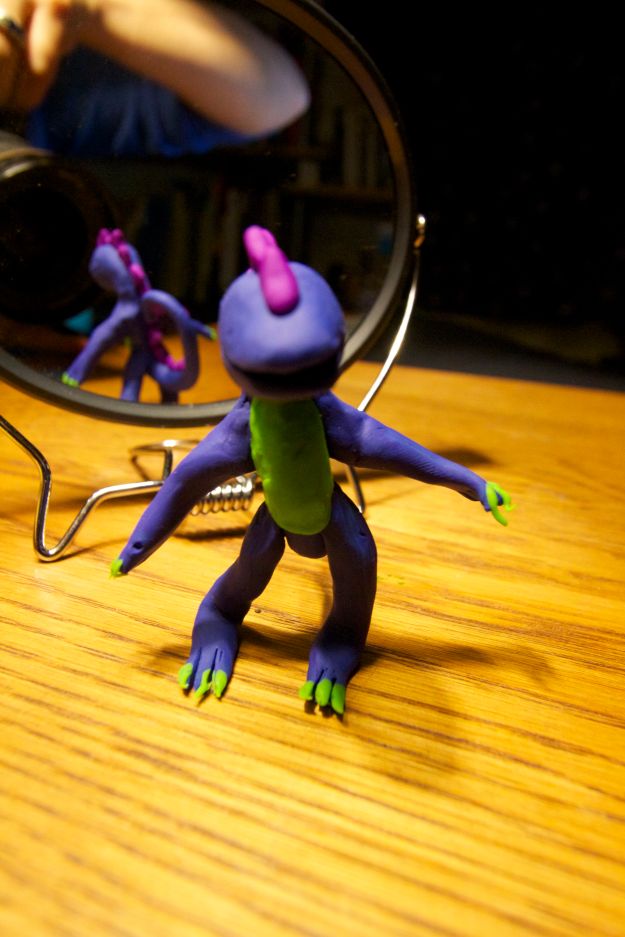 There’s the proof. No eyes.

I wanted this model for other reasons as well, to help me begin experimenting with dimensionality and perspective in this comic, so I could see Dragon from various angles and understand how the body would appear, and how the different parts might move.

This model is just under 3 inches high, which is fairly big for a baked clay model. In order to create a figure of this size that could stand alone on 2 legs, I needed to prop it up with a scaffolding (eventually, 3 unopened bars of Sculpey) as I was building it, and then offer it some extra support in the oven (provide by a small glass dish and a strategically placed knife and spoon).

Even so, Dragon does seem a bit off kilter, weaving to one side like a drunk college freshman walking into a big dance. Plus, those finger nails are off the hook; I gave up on keeping them straight long before Dragon got in the oven. I’m frankly amazed they’re still attached, considering how all the little details fell off my last set of Sculpey models. Although it’s easier to work with, in many ways, than real clay, it’s not as strong or sturdy. 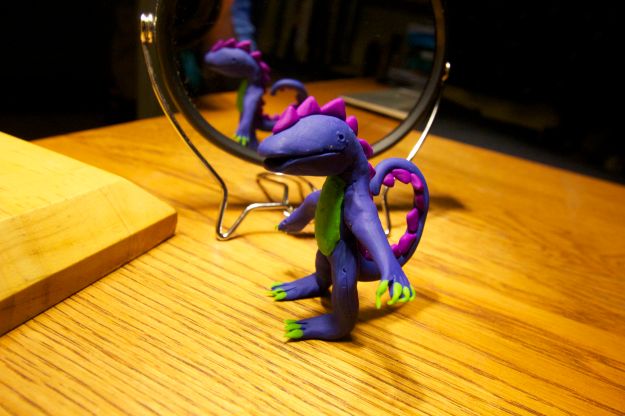 Can I help you?

I tried to make both sides a little different, but the way the figure settled in the oven pulled it lopsided anyway. Still, this should be an effective tool.

If Cox took all the energy they direct into trying to sell me cable and long distance for 2 devices I don’t even own and devoted it to maintaining the network that renders the device I do own fully functional, this post would not be so late.

For your Friday pleasure, please browse an assortment of 3D dragons, I models with my own little hands.

Dragon number 1 sprung forth into existence some 2 or 3 years ago when a game-maker friend mentioned that 4 little lumps of clay were reserved for the construction of a dragon figurine to be used in a game she had created. I took control of the project and came up with this handsome fellow, Perhaps his details are a little rough, but he’s only 1 inch high, and my hands aren’t that small.

It took 4 shots to encompass all his adorable qualities.

Next on our list we have a rather old dragon. In 1993, student teaching at a private elementary school for hippie children with rich grandparents, I came across a lump of dried clay, in which I couldn’t help but see the whorls and angles of a dragon’s face. The principal told me that I was wasting my time, that the lump would crumble, that it was too thick to ever be fired. I ignored him and coaxed this friendly face into the world. 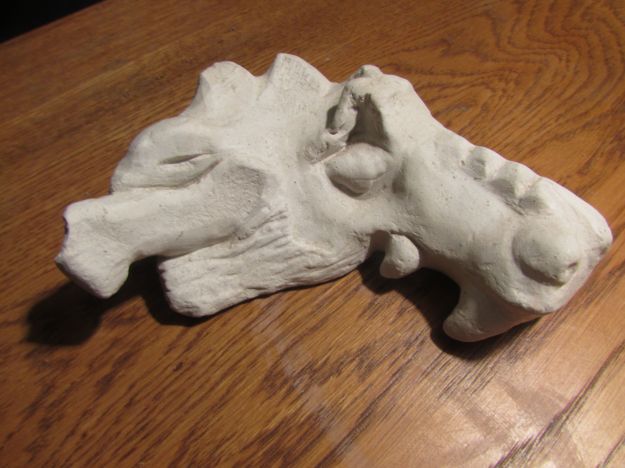 A rather serene dragon, with only a little chip missing from his horn.

Finally, completing our triumvirate of dragons, a dragon pendant I made in 2006 while playing with my ex-boyfriend’s daughter.

Of course, the fuchsia fellow on the right is actually a cat, not a dragon, but he came into existence at the same time as the dragon, and they are the best of friends and go everywhere together.

Wait, what’s that you say? You want a hardworking bubblegum punk mandala before you go. BAM. Enjoy. 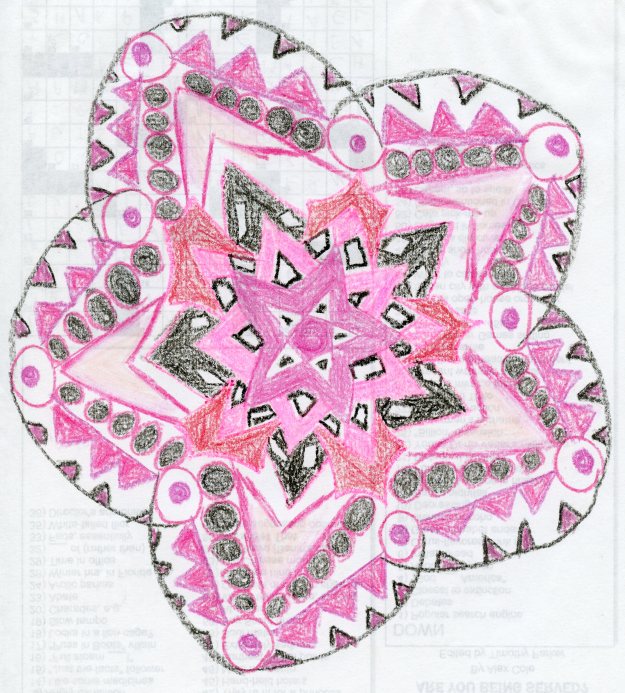 Pentagram mandala is in the house!

In case you wondered what Dragon is up to, Dragon is doing well, thanks! I already have one comic for next week, and if I finish a second one this weekend, maybe I’ll try to create them on a M-W-F schedule.

It seems like some of my difficulties with perspective stem from the condition of strabismus exotropia, which I’ve had since childhood. In short, I have no depth perception. Drawing dimensionality can be a challenge, but modeling seems much easier. Taking a break from writing my last night on retreat, I decided to go 3D with Sculpey. 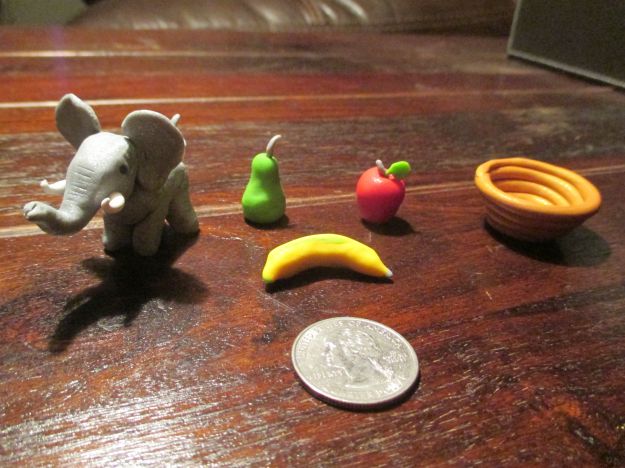 The fruits of my labors. The quarter is for scale. I didn’t have a real banana because I made pancakes out of them.

Since the protagonist of my graphic novel is so influenced by turn-of-the-century boys’ colonialist adventure novels (this week I’ve read The Son of Tarzan and King Solomon’s Mines) an elephant seemed like the obvious place to start. 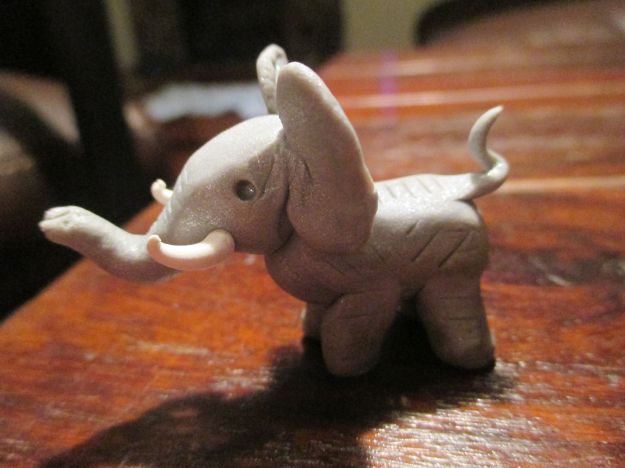 The other side of the elephant

My little tusker is a proud bull, bearing the magnificent ivory appendages of his people.

There are plusses and minuses to working in miniature. I tend to feel more comfortable with small detail, but it’s so much easier to screw up, particularly to screw up something you’ve already gotten right. His tail must have fallen down ten times before he went into the oven, but it’s standing up pretty well now.

The banana is a bit lumpy for my taste. Maybe it’s organic or something. I learned how to coil pots like this when I was a little girl.

Once Tantor was finished, I felt the motivation to continue, but with something simpler, so I went for an apple, which quite naturally led to a pear and a banana. From there, it made sense to coil a little fruit bowl.