For some reason, some people don’t appreciate the beauty of a giant beetle flying into things and dying tragically in your swimming pool filter.

The ASDM webpage on which I found the reference photo of the larval beetle offers this statement of caution for desert motorcycle enthusiasts who don’t wear helmets: “Being hit in the face by a beetle this size can be quite painful.” That’s probably an understatement; one flew into my head earlier this month and I wasn’t even coming toward it at 60 miles an hour and it still felt like being hit by a rock.

Anyway, I think these creatures are fascinating, and, for whatever reason, they don’t feel like cockroaches to me. My response to cockroaches is visceral and immediate; if one crosses my path, I feel compelled to smash it as if it’s a vicious, carnivorous alien (even though cockroaches are harmless, vegetarian, and have been around longer than humans). My response to giant palo verde beetles is, “Cool! It’s a giant bug!” And then I take a picture and send it to my nephew or something. He’s at a prime age to appreciate giant bugs.

My first script had the final panel as some snarky remark about how maybe these insects had it all figured out and maybe we’d be better off if we spent our childhood and adolescence underground and then had thirty days to mate before dying, leaving the next generation to figure things out on its own. Then I thought I’d go for a straight biology story, with only a little snark. Then I finished the artwork and thought the panels looked kind of blank, so I put the snark back in, in word balloon form. That’s why the text doesn’t quite fit the space.

For ten years, I’ve lived in the Sonoran Desert, where we enjoy 330 days of sunshine every year. It may be hot, but it is also beautiful, full of sharp contrasts and luscious details.

This agave had reached the end of its life cycle. After sending up the shoot and flowering, the plant will die, but for a brief, breathtaking moment, it resembles a flaming torch. 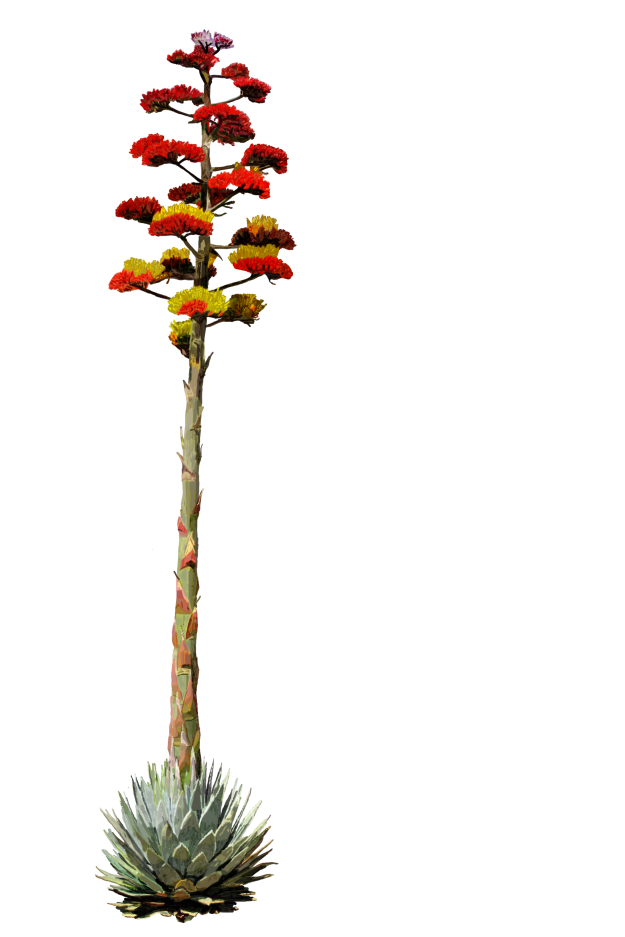 If all else fails, you can always make tequila.

This drawing is based on a photograph I took over the summer; I had a 2-day window in which this plant exhibited these gorgeous colors. In fact, I wanted to paint a hibiscus today, but I couldn’t lay my hands on the right reference image.

This lovely design is available for purchased on a variety of fine products in my shop.